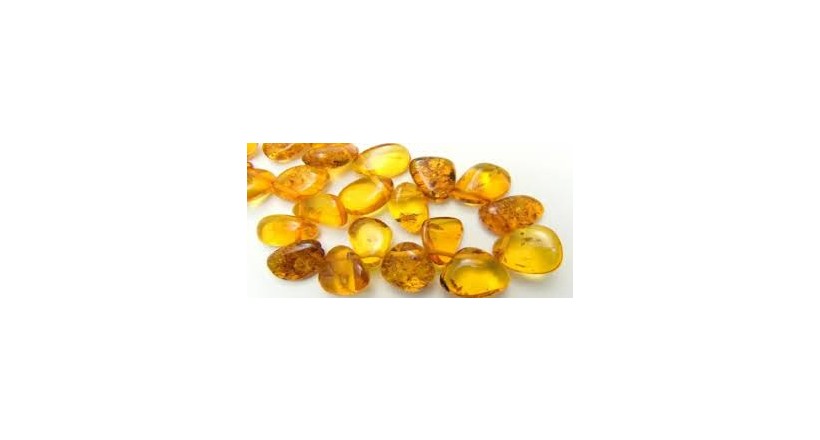 Amber is one of the most famous and most attractive gemstones. It is characterized by its yellow color, which is similar to the color of beeswax, and can be found in rare cases in several other colors, such as blue, green, reddish and brown, And its chemical properties as a result of exposure to one of the chemicals or elements and impurities in one form or another. As for the origin and composition of the amber stone, it is a fossil resin created by one of the ancient species that descended from the family of pine trees that were extinct and lost millions of years ago. It is characteristic of this stone that it floats on the surface of the water and produces a distinctive aromatic smell when exposed to friction, in addition to that in many cases is the beginning of an insect or ancient objects that were suspended inside when it was in the form of a sticky sticky before it was shrouded and become in his condition Known today, we can only say that the discovery of the amber stones in which these objects were placed has provided an amazing opportunity to develop our knowledge as human beings of the ancient living beings on the surface of the earth and then extinct in an era later and even in some case If they are not extinct yet they do not remain a wonderful opportunity to study The ancestors of those beings.

When we look at the amber stone on the basis of its classification, an important question arises as to what this stone is and whether it is considered as a stone like other precious stones such as saffron , sapphire and others. Well, in fact when compared to the process of forming an amber stone with the other stones mentioned above, we find that the amber is not geologically composed of metal elements, but on the contrary it is due to the origin of the plant is not extinct species of "pine trees," which means that it Organic origin and not the product of crystal crystallization. The amber stone is scientifically considered semi-metallic because of its origin (sown fossilized wood) and is classified as organic gemstones . However, amber is one of the precious stones and value that has long been used in the jewelry industry and the women's beauty.

Amber stone is known to many peoples of the world as a stone symbolizing cleansing and purity. Historic studies on amber stone have historically indicated that it represents the sun's energy, which is closely related to the meanings of alertness, happiness and joy, as well as the stimulation of love . It is also worth mentioning that he is famous for his ability to attract and spread love, happiness and pleasure, so it is not surprising that many individuals in our time accept to buy it because they believe that it is the most fortunate and joyful . Although these are just beliefs and legends, they leave a good impression, if only to a moral sense and feeling worn . While the mythological beliefs about Amber Stone can speed up the healing process, it was one of the gifts that carries the meanings of wishful thinking if given to someone recovering .

The color of amber is similar to the yellow color of wax, and can be found in several other degrees as well : blue, green, red and brown. It is clear from the above that the amber stone is not a crystal in the strict sense of the word, but rather a semi-mineral due to its origin (weaves a fossilized tree).

Amber stone is the most abundant stone in the Dominican Republic, Poland, Latvia, Italy, Spain and Mexico. It is noteworthy that the features of this remarkable stone have been discovered for nearly 2,600 years in Greece.

Thales Melti has discovered the dramatic amber features of more than 2,600 years ago. In Greece, where friction between the amber and the cloth is made, it is observed that it produces static electricity, also called static electricity. We can not help but point out that this was one of the first indications of the existence of electricity. In any event, the term amber was associated with the presence of electrons and hence the name of electricity was derived from this term. It is also known that the amber necklace represents a kind of electric condensers, which did not dispel the legendary speculation of its capabilities. This relationship was linked to the ability to recharge and recharge by helping the owner to get rid of excesses and inactivity. It also represents spirituality and has the ability to connect individual energy with cosmic energy, as well as individual spirit with cosmic spirit. It symbolizes attractive solar energy and divine spiritual energy.

The origin of the amber also reflects some glimpses of spiritual qualities, which can become obvious if we look at the trees as entities with their deep roots in the ground, as well as their ascending branches towards the high sky. In the spiritual sense, the trees describe the connection of the sky to the Earth by converting the sun's energy with the help of the mineral kingdom, and then the energy is ultimately provided by the fruits and fruits of those trees. So the power of a tree's life can carry energy, and then transform it into our own. Similarly, amber stone is one of the means of forming spiritual energy in the physical body as long as its presence is necessary for light to prevail. By contrast, in the absence of a spiritual state, the amber stone can initiate a sense of material rather than spiritual.

The amber stone was used in the treatment of thyroid hyperplasia and other throat diseases. In addition, I also use kidney and bladder treatment. Common myths about amber stone say it has a strong ability to protect against disease and reduce pain during childbirth.

The beliefs and myths that we have mentioned about amber stone are nothing more than baseless fantasies, and we have referred to them in terms of documenting this ancient historical cultural part.

Do not miss out on other gemstones , and share your comments and opinions.Also, do not forget to use the article with your friends on social networking sites!