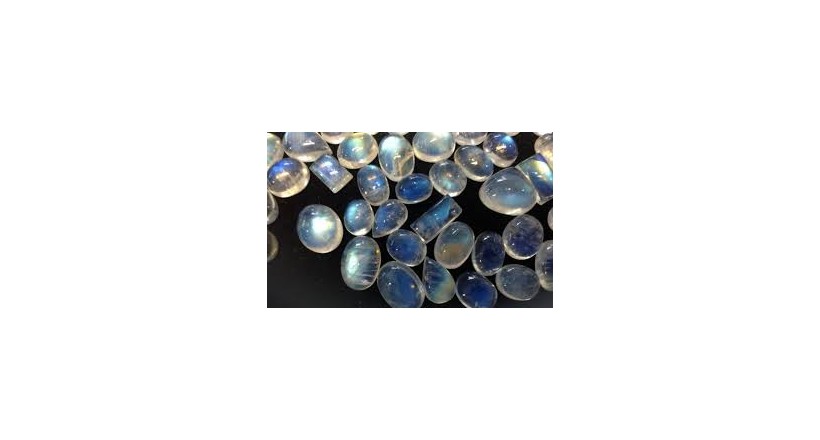 Romanians have used the moon stone in the jewelry industry for about 2,000 years, and there are theories and studies that prove that the Middle Eastern people have used it for a longer time in the manufacture of jewelry and accessories. Since ancient times it has been considered a sacred stone in India with the great importance of lovers, and as a traditional gift there in weddings and seasons. The Moon Stone is also a preferred choice for jewelry makers in the modern art industry, while in Europe it was believed to be able to meet distant lovers and treat insomnia.

Named because of its luster-like luster, the moonstone is made of metal feldspar and is characterized by its sleekness. The stone is found in shades of blue, gray, white, and sometimes a peach color. There is a group called a rainbow stone because of its prismatic properties for light. The Moon Stone is known as the Passenger Stone because it was thought to be able to protect its occupants during their travels, especially in the evening. As a result of the height of the hopes, it was considered one of the precious stones that was worn as an amulet for long periods

Since the beginning of time, I believe that there is a tangible relationship between the moon stone and the characteristics of the moon. It explains why it was common among travelers and why it is a valuable gift for lovers, as a source of wisdom and knowledge. It is said in astronomy that there is a strong correlation between us and the moon relative to the degree of extinction over the course of its continuous cycles, which increases the close link between us and between the Earth and it affects our actions and feelings. The moon stone helps to calm the nerves and motivate them to do various tasks, also helps us to recognize the beauty of nature and harmony in life.

It symbolizes the clarity of mind and inner insight where it helps the individual to meditate and reach a certain degree of perception. Known as a cycle in the stability of emotions and the balance of the yen and yang.

It was known that it helps to spread the energy of the new moon when it is at its maximum.

The heart helps its role in supporting the functioning of the mind, also works to eliminate anxiety and show the best of a person's abilities.

Serves as a publication that spreads energy throughout the aura. Where it provides psychological protection and purity of mind and senses.

Moon stone is identified and identified by light. One of its distinguishing characteristics is its mysterious flash, which appears differently when the stone is moved. The main source of this stone is Sri Lanka, where it is home to the moon stone, which is characterized by a blue blaze and transparent background. The characteristics of the stones, which are due to India, are characterized by a unique reflection of light and the presence of shadows on the background of brown, green and orange, those distinctive colors besides his own blinking. It is considered a first class gemstone, which is used mainly in women's jewelry industry.

What is the origin of that mysterious flash?

The Source of Flashing Mysterious Light in the Moon Stone is a very special thing in the world of gems. It is called the specialists "name". This is due to the formation of the quarantine. The light on it is broken and scattered on it to produce this distinctive appearance. This is one of the factors that led to the discovery of the stone and made it attractive.

In any case, this beautiful gem has a weak point, which is a result of being relatively weak and low degree of salad to reach 6 on the scale of Moss can be broken. So when dealing with moon stones it is always advised to take caution because it is sensitive. It is important to know that it is inevitable to be scratched and affected by the erosion factors when wearing a bar of time, looking at the bright side, we find that some specialists in jewelry and maintenance of precious stones can re-create the stone and restore the elegance and even return that wonderful flash The same as the first day.