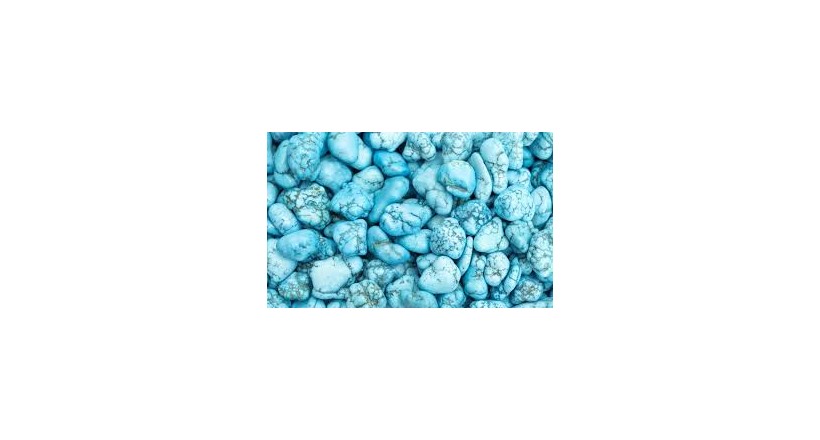 The turquoise stone is the oldest gemstone ever known in human history. It was used by kings to decorate their royal crowns and clothing, and even to distinguish the tools they used to use in their daily lives, such as the ancient Egyptian pharaohs, while at the same time priests The turquoise stone in the preparation of their rituals or to add them to their holy symbols for their belief in his abilities and contact with high powers or even for the same purpose that the kings used him to decorate and distinguish from the public, also used by the warriors to give a distinctive shape on their swords and armor, especially the knights and veteran warriors. In many cultures, turquoise stone is a symbol of protection and strength. It is soft in texture. I believe in its ability to heal eyes as it feels comfortable when one looks at it as it is sculpted in the sky and then penetrated the earth.

Is characterized by a unique degree of blue, which is usually a combination of blue and green, which explains why the acquisition of the name of his own is the stone turquoise, noting that turquoise in English is the name of that degree of colors, Brown, which enhances the character of the stone and gives it a special aesthetic shape. The name of the turquoise, which is called in English "turquoise" is due to French, which means "Turkish stone" because the commercial routes where the shipment of stone to Europe relate to mines in the middle of Asia, which was passing through the state of Turkey, That traders buy stone from Turkish markets.

For thousands of years, turquoise stone has been used in all civilizations and cultures, such as wisdom, nobility and immortality among ancient Egyptians, Persians, Chinese and Incas in South America and indigenous peoples in North America, where turquoise stone was sacred to some people's belief in power and fortune. And protection.

It was discovered that turquoise stone in Iraq was analyzed with irradiated carbon to be given an estimated date, which showed that it dates back to more than 5000 BC, while the Pharaohs in the Sinai were extracted from the Sinai mountains 3200 BC. The mask of Tutankhamun dates back to 5,000 BC and was decorated with turquoise stone. It is also used in the decoration of similar tools of the time, such as the masks that symbolize God. In South American cultures, it is used in skulls with precious stones, shields and statues. .

For nearly a thousand years, the indigenous peoples of South America have been mining and making turquoise stones for use in guarding their burial places, to be discovered later in Argentina and Mexico. While for the Indian priests they used it also in the seasons and holy holidays where many believe that it is a universal stone that allows their minds to unite with the universe when they wear it.

·         The turquoise stone of precious stones is easy to scratch and affected by friction, so it is recommended to add a wax or glue on the surface to keep it for as long as possible as the salad on the scale of Moss ranging from 5 to 7.

·         The turquoise stone consists of a union of the elements of aluminum and copper phosphates along with iron and some other elements with a small percentage.

For hundreds of years I believe that the turquoise stone contains the force that protects the cavalry from the injury resulting from the fall, which was used initially by the Turkish soldiers to decorate their armor to become a symbol of prevention of the fall of various types. At the same time, the turquoise stone was known to be affected by the psychological state of the person wearing it. The patient is sick or sad to lose his full color when the holder dies and then regain his color again when he is acquired by another new person.

One of the strangest uses of turquoise is that many people believe that the person who wears it will not need to get a friend. He is considered a good friend and lieutenant in East Asia. He believes in the ability of turquoise stone to protect him from all kinds of evil. He is guided to you by someone who is dear to your heart and provides happiness and good luck. In any case you will not benefit from this property as indicated in the quote unless you are presented by a friend. He is also famous for his ability to make the individual think better and get a clear insight.

The turquoise stone is characterized by its value as a garnet used in the decoration, which is supposed to symbolize the strength of the man, as the doctor of the court Rudolf II wrote in 1609 that the turquoise stone was much appreciated by men where he was not best decorated only if wearing something Restaurant. Today it is known that turquoise stone strengthens men and women alike whether it is worn or carried, it symbolizes good luck, success, ambition and creativity.

Within the working environment, turquoise stone is the driving force and helps to travel and regular mobility associated with work alongside its role in overcoming the non-good investments. It is usually very suitable for those who work in a job related to the law or in the government, while it is especially recommended to accountants and computer technicians for the ability to relax the mind and eliminate the feeling of pressure while also for those working in the field of radio or television helps to eliminate tension .