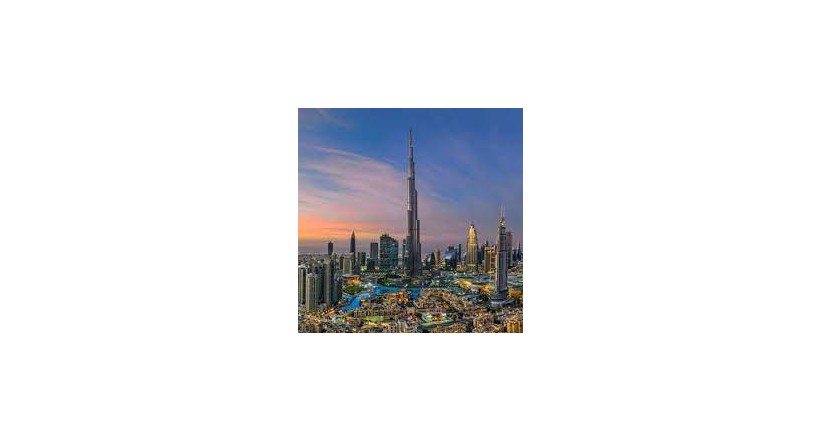 Its construction began in the Emirate of Dubai in the United Arab Emirates on January 6, 2004, and its external structure was completed after five years (on October 1, 2009). It was opened on January 4, 2010 as part of a new project called at the time the development of Downtown Dubai. The decision to construct the building is based on the government's decision to diversify from an oil-based economy and for Dubai to be a global tourist destination. The building was originally called Burj Dubai but was renamed in honor of the ruler of Abu Dhabi and President of the United Arab Emirates Sheikh Khalifa bin Zayed Al Nahyan when Abu Dhabi and the UAE government lent Dubai money to pay off its debts. The building broke many records, including being ranked as the tallest building in the world.

Burj Khalifa was designed by architect Adrian Smith (of Skidmore, Owings & Merrill), the same firm that designed the Willis Tower and the World Trade Center. Hyder Consulting was chosen to supervise the engineering works and Norr International Consulting Group of Companies Limited to supervise the architecture. The design is derived from Islamic architecture, as is the case in the Great Mosque of Samarra.

The floor is designed in a Y shape in order to optimize the space for both residential and hotel purposes. A central core and buttressed wings were used to support the height of the building. Although the design of this floor is derived from Samsung Tower 3, the central core of Burj Khalifa houses all vertical means of transportation except for the exit stairs within each wing.

The outer structure of the tower is also covered with a material that can withstand the hot summer temperatures in Dubai. The tower has a total of 57 elevators and 8 escalators.

At a certain point in the architectural and engineering construction process, Emaar developers ran into financial problems and needed more money and financing. Sheikh Khalifa, the ruler of the United Arab Emirates, granted monetary aid and financing, which led to the change of name to “Burj Khalifa”. The concept of profitable returns derived from the construction of high-density residential projects and shopping malls around the landmark has proven successful. The shopping malls, hotels and condominiums surrounding the tower in Downtown Dubai generated most of the revenue from the project as a whole, while the Burj Khalifa itself generated little or no profit.