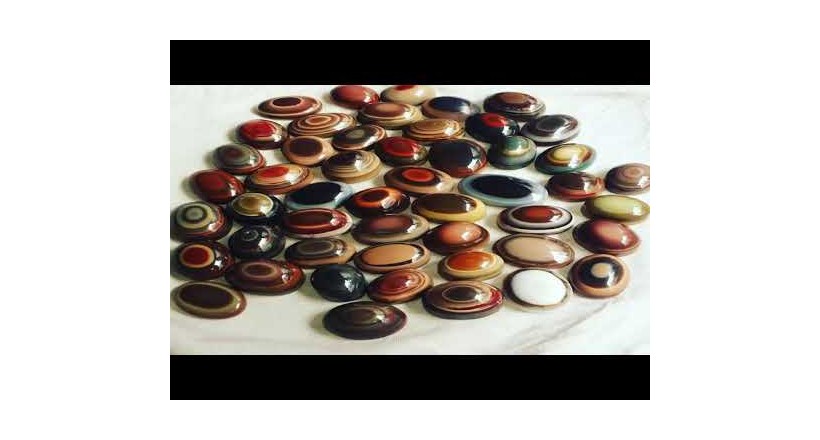 Stone Agate Sulaimani is one of the types of agate stone, which belongs to the family of quartz, is rated 7 degrees on the scale of the moss of the hardness and is distinguished by the presence of signs similar to "eye" is based on the valuation of its value. The stones of the agate are known in the Arab world, especially in comparison to their popularity in the West, due to several factors, including the most important beliefs and legends inherited by the generations around them as well as their distinctive appearance and availability in most Arab territories.

Due to the presence of thousands of species of agate stones , this is reflected in the Sulaimani stone, because it is not a class of precious stones, but it is classified according to apparent factors as we mentioned the presence of circular shape on the surface of the eye and not based on its characteristics and chemical composition. The Sulaimani stone can be found in many shapes and colors, most notably brown in size, black, white and red.

The agate stone is used in the jewelery industry especially for men, and this is reflected in the exhibits of shops of those stones, which we see that most of them include rings and chains men. But this does not negate the fact that there are no exhibits for women. It should be noted that many of Sulaymani's acquisitions are made through its acquisition in a ring or as a separate stone in itself, where many individuals tend to retain it for matters related to the personal preferences and beliefs of the acquirer.

Sulaymani is referred to as the type of agate stones in relation to the Prophet Solomon and what is known about his ability to subjugate the elves and execute his orders and so on supernatural abilities such as talking to animals as mentioned in the Koran. For example, when the hoopoe came to the Prophet Solomon to tell him that he saw a queen with a great throne on Yemen and that its people worship the sun without God, which angered the Prophet when he heard this statement until he sent a letter to the Queen asking her to believe in God and Islam, the Queen responded in her reply and sent to the Prophet Gifts and precious stones to avoid a war with him on the one hand and to test the truth of what they claim on the other hand. The Prophet (peace be upon him) refused to receive what was sent to him. The Queen believed in what the Prophet called the Prophet, until the Prophet Solomon asked the jinn to come to him with the throne of Bilqis until he was impressed by the extent of God Almighty's ability. . Suleiman also ordered the Elves to build a large glass and water palace to receive the Queen, who obeyed his orders and executed him as requested.

Thus, the beliefs prevailing in the Arab Bekaa in this age were formed on the basis of that story and what has been added to it by history by the possessor of these stones and merchants.

The Sulaimani stone is acquired by many because they think it is inhabited by the Jinn and to believe in its strong effectiveness and ability to bring livelihood, luck and love along with its ability to cover the time of intercourse.

According to the old beliefs, in order to obtain the benefits of Sulaimani stone, it should be worn as a seal, chain or amulet or even carrying it as it is for a short period estimated in the weeks, where it is believed to be faster than other precious stones.

Places of extraction of Sulaimani stone

Most of the stones are extracted from the sands of the sultan from Yemen as well as their possessions. According to the beliefs, this is the main source for them because it is the place where the story of the Prophet Solomon and the Queen of Sheba took place. However, these stones can be found in a number of other countries where general agate stones are extracted, such as Iraq, India and the United States of America. These stones are specifically located in the mountains and deserts in their natural form, to be extracted and found to carry out the processes of preparation, polishing and polishing.

It should be noted that the stone spread is very similar to Sulaimani stone, a non-original product of many sellers and popular shops, where they are marketed on that basis and at high prices. Most of these stones can be distinguished by gemstone experts and professional vendors.

Therefore, you should be careful during the process of selection and acquisition of Sulaimani stone by checking well before buying or resorting to one of the gem shops and dealers reliable in this area.