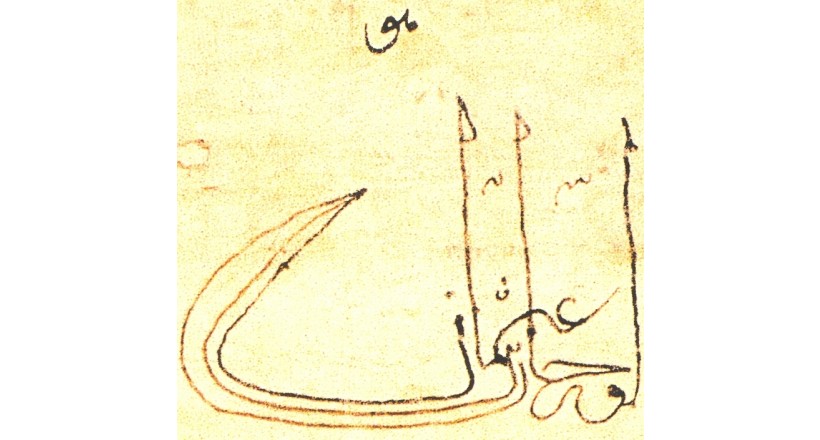 Historians have disagreed  in the origin of the Tughra . Some says they may be distorted by the Turkish word ( Trgai ) which means stander or erect and may be a distortion of the word ( trgl ) which means hawk or mythical bird and another opinion says that it is derived from the word ( Tog ) for horsehair as they mean Wisp Meshing in a studded pin and darted in a turban ( Kacan )

Toughra presents the top of artistic beauty In Arabic calligraghy for its iconic difficult shape to imitate but for professionals with talent after a long training period . Toughra also considered the finest findings in abstract art in the Arab character proven the artist ability in creativity and innovation . With no doubt that they achieved a unique shape for lines meanings and Arabic calligraphy abstracted shapes . And that clearly shows in the visit of the worldwide Spanish Artist ( Pablo Picasso ) for one of the Arabic calligraphy galleries when he stood in front of one of Toughra paintings saying that this art have reached the maximum he had ever aimed to

Parts of a Toughra :- When Toughra evolved from its primitive to the advanced current shape it was consisting of 4 main parts and they are

-Stand :- Stand or Base of Toughra that includes the main text and looks like pear . In its first levels it was closer to the elongation but it began to narrow from top in the period of Sultan ( Selim the second ) then the base became more like a circle till it reached its last shape

Egg is located in the left side with its magnificent roundness that commensurate with the base in such a beautiful balance . And when the ( Mozafar or victorious ) word been added to the sultan name with ( R ) Character extended to interrupt with the Egg bows which gave the bows extra beauty and in the middle of the egg the Du'aa word ( da'man or Ever ) which means the sultan would be ever victorious

-Tughs :- Tughs or Tog called over the lines extensions of characters like ( Elif ) ( Lam ) ( Taa ) or ( Zaa) in Arabic in the upper part of Toughra where name is derived from .Some times Tughs don't present any character extension but separate supplement lines for Toughra shape . Trailing from each Tughs what looks like flags called ( Zolfa ) . In each Toughra will find 3 Tughs  & 3 Zolfas the 3 Tughs are Parallel . Some earliest Toughra has more than 3 Tughs

-Arms :- shows in the Toughra right side as two parallel lines starting from the eggs and running to the right side of the Toughra with beautiful bow to finish the musical image with great abstract . Calligraphers tried to fill the Toughra right side empyiness with words like sultans special nicknames so they wrote ( Gazi ) ( Rashad ) or ( Adly ) those words also known as ( Mokhlas ) and sometimes the emptiness was filled with some flower painting

Toughra writer : Toughra was written by personnel called nisanci well known as law Mufti and also called tughrakesh , tughrai or tughranuvis and he is considered one of the high position equals a minister degree , wearing special clothes and also have expert in the state laws as he is the one in charge of writing fermans patents official letters to the foreign state governors . He is the sultan's secret decisions holder in the Ottoman Empire . Some sultan were writing Toughra themselves with their mastering of the Arabic calligraphy like sultan ( Mahmoud bin abd elmajid ) . Some of the best tugra masters on its perfect shape and strict rules are ( Mustafa Rakim ) , ( Sami Efendi ) and ( Ismail Hakki )

Toughra Historical importance :-  Toughra have helped in researches and codification for covenants written for like ottoman sultan's covenants as well as eras differentiation from all sides . Coins also played a large rule in recording history and sultans authority duration . Over six centuries thousands of documents treaties fermans money in all forms ( coins , banknotes ) what preserved in museums libraries and special collections have been gathered