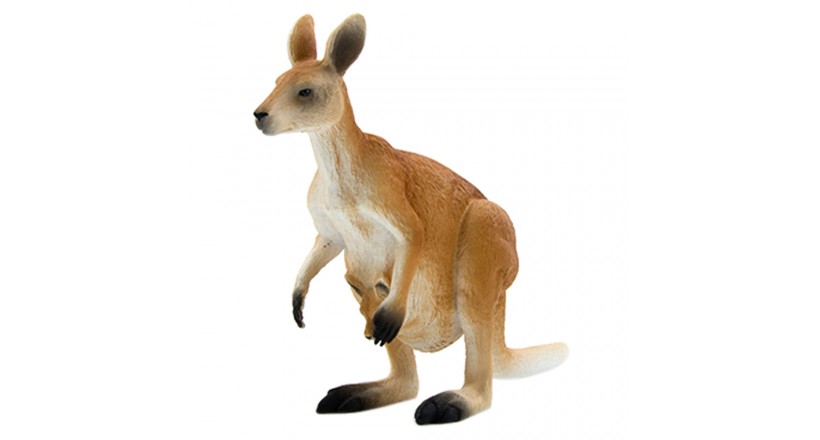 Alguengr  : is the most famous and largest marsupial animals, exist in abundance in Australia there are about 90 species of kangaroos, medium type which is called Alolr . and the small helix Or small kangaroo, and there is a very small species called the rat kangaroo. One of the largest and longest species is the red kangaroo, which reaches a height of two meters and lives in open grassy areas inside the country in groups or swarms, and these flocks graze during the night and rest in the shade during the day. When the red kangaroo grazes, it runs on all fours, laying its tail on the ground and what its legs are forward and the tail is very important to maintain balance when the kangaroo jumps and the jump is the way in which it moves quickly and the adult kangaroo can jump five meters and cross a barrier two and a half meters high and the two hind legs and clutches are used for defense, for example when Two males compete or be attacked by farm dogs, and then kangaroos can seriously harm dogs, and kangaroos are a skilled swimmer and fast digger and often dig into the ground in search of drinking water.

Among the smaller wallaby species there are heavy guilt species that like lush vegetation, and the rocky spiral prefers rocky areas. The species that live in zoos is usually found in grassy prairies. The types of rat Alkengro There are eight species. Small ones may not exceed 30 cm from the tip of their nose at the end of their tail, and the kangaroo rat is different from the kangaroo-like rats that belong to the family of rodents. It may seem surprising to see a kangaroo on a tree, but this species really exists even though it seems confused in its climbing relying on its long claws.

The indigenous people of Australia have lived by hunting kangaroos for hundreds of years and Mukhlid mentioned it in their traditional dances and graphic art, and today the kangaroo is Australia's national symbol.