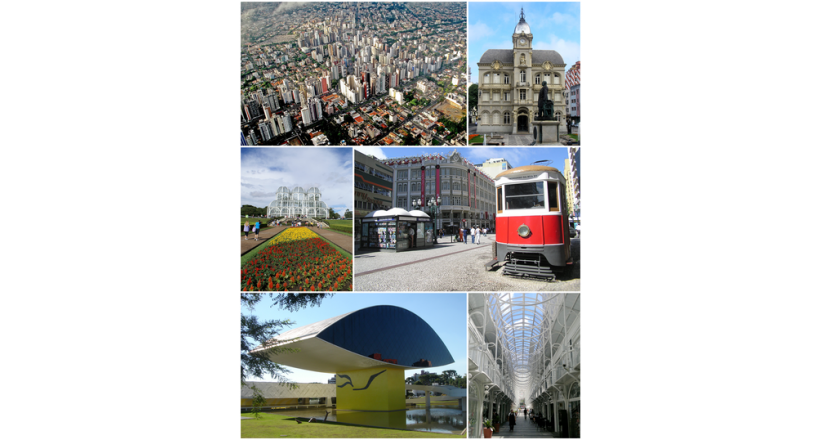 Curitiba (Brazilian Portuguese: [kuɾiˈtʃibɐ]) is the capital and largest city in the Brazilian state of Paraná. The city's population was 1,879,355 as of 2015, making it the eighth most populous city in Brazil and the largest in Brazil's South Region. The Curitiba Metropolitan area comprises 26 municipalities with a total population of over 3.2 million (IBGE estimate in 2010), making it the seventh most populous metropolitan area in the country.

The city sits on a plateau at 932 metres (3,058 ft) above sea level. It is located west of the seaport of Paranaguá and is served by the Afonso Pena International and Bacacheri airports. Curitiba is an important cultural, political, and economic center in Latin America and hosts the Federal University of Paraná, established in 1912.

In the 1700s Curitiba's favorable location between cattle-breeding countryside and marketplaces led to a successful cattle trade and the city's first major expansion. Later, between 1850 and 1950, it grew due to logging and agricultural expansion in Paraná State (first Araucaria angustifolia logging, later mate and coffee cultivation and in the 1970s wheat, corn and soybean cultivation). In the 1850s, waves of European immigrants arrived in Curitiba, mainly Germans, Italians, Poles and Ukrainians, contributing to the city's economic and cultural development. Nowadays, only small numbers of immigrants arrive, primarily from Middle Eastern and other South American countries.

Curitiba's biggest expansion occurred after the 1960s, with innovative urban planning that allowed the population to grow from some hundreds of thousands to more than a million people. Curitiba's economy is based on industry and services and is the fourth largest in Brazil. Economic growth occurred in parallel to a substantial inward flow of Brazilians from other parts of the country, as approximately half of the city's population was not born in Curitiba.

Curitiba is one of the few Brazilian cities with a high Human Development Index (0.856) and in 2010 it was awarded the Global Sustainable City Award, given to cities and municipalities that excel in sustainable urban development. According to US magazine Reader's Digest, Curitiba is the best "Brazilian Big City" in which to live Curitiba's crime rate is considered low by Brazilian standards and the city is considered one of the safest cities in Brazil for youth. The city is also regarded as the best in which to invest in Brazil. Curitiba was one of the host cities of the 1950 FIFA World Cup, and again for the 2014 FIFA World Cup. Despite its good social indicators, the city has a higher unemployment rate than other cities in the state.