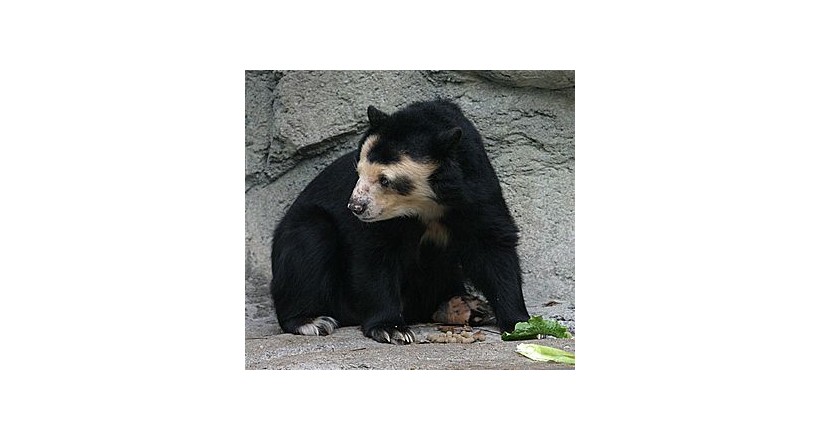 The spectacled bear (Tremarctos ornatus), also known as the Andean bear, Andean short-faced bear, or mountain bear and locally as jukumari (Aymara and Quechua), ukumari (Quechua) or ukuku, is the last remaining short-faced bear (subfamily Tremarctinae). Its closest relatives are the extinct Florida spectacled bear, and the giant short-faced bears of the Middle to Late Pleistocene age (Arctodus and Arctotherium).Spectacled bears are the only surviving species of bear native to South America, and the only surviving member of the subfamily Tremarctinae. The species is classified as Vulnerable by the IUCN because of habitat lossThe spectacled bear is the only bear native to South America, and is the largest land carnivoran on that part of the continent, although as little as 5% of its diet is composed of meat. South America's largest obligate carnivorous mammal is the jaguar (Panthera onca). Among South America's extant, native land animals, only the Baird's tapir (Tapirus bairdii), South American tapir (T. terrestris) and mountain tapir (T. pinchaque) are heavier than this species. The spectacled bear is a mid-sized species of bear. Overall, its fur is blackish in colour, though bears may vary from jet black to dark brown and to even a reddish hue. The species typically has distinctive beige or ginger-coloured markings across its face and upper chest, though not all spectacled bears have "spectacle" markings. The pattern and extent of pale markings are slightly different on each individual bear, and bears can be readily distinguished by this. Males are a third larger than females in dimensions and sometimes twice their weight Males can weigh from 100 to 200 kg (220 to 440 lb), and females can weigh from 35 to 82 kg (77 to 181 lb) Head-and-body length can range from 120 to 200 cm (47 to 78.5 in), though mature males do not measure less than 150 cm (59 in). On average males weigh about 115 kg (254 lb) and females average about 65 kg (143 lb), thus it rivals the polar bear for the most sexually dimorphic modern bear. A male in captivity that was considered obese weighed 222.5 kg (491 lb). The tail is a mere 7 cm (2.8 in) in length, and the shoulder height is from 60 to 90 cm (23.5 to 35.5 in). Compared to other living bears, this species has a more rounded face with a relatively short and broad snout. In some extinct species of the Tremarctinae subfamily, this facial structure has been thought to be an adaptation to a largely carnivorous diet, despite the modern spectacled bears' herbivorous dietary preferences.