Coat of arms of Uzbekistan 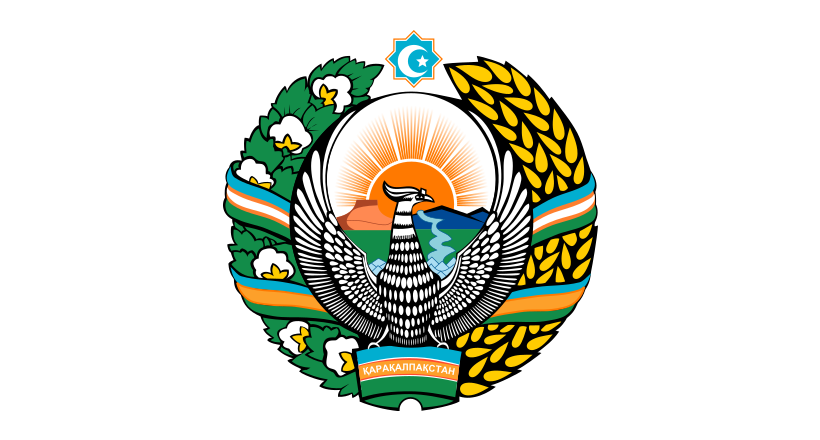 The state emblem of Uzbekistan was adopted on July 2, 1992. It is similar to the emblem of the previous Uzbek SSR. Like other post-Soviet republics whose symbols do not predate the October Revolution, the current emblem retains some components of the Soviet one. Prior to 1992, Uzbekistan had an emblem similar to all other Soviet Republics.

The emblem is in the form of a circle and mainly bears the national colors blue, white, and green, replacing the Soviet motto "Workers of the world, unite!" where the red ribbon previously stood. On the left there is a cotton plant and to the right wheat borders the insignia, cotton and wheat are the two major agricultural products of the country.

It is surmounted by the star of Rub El Hizb (۞), a symbol of Islam, which a majority of Uzbeks profess.

In the center, a right-facing khumo, a bird symbolizing happiness and love of freedom, is displayed with wings outstretched. Enclosed by the khumo's wings is a depiction of the rising sun over mountains. Two rivers, the Amu Darya and Syr Darya, flow from the mountains and crepuscular rays emanate from the sun.

The khumo is perched on a banner at the base of the cotton and wheat borders which bears the national colors and the name of the country in Latin (Oʻzbekiston) script.

Karakalpakstan uses an emblem similar to Uzbekistan's, but featuring the regional colors blue, gold, and green, and also featuring the Amu Darya river.