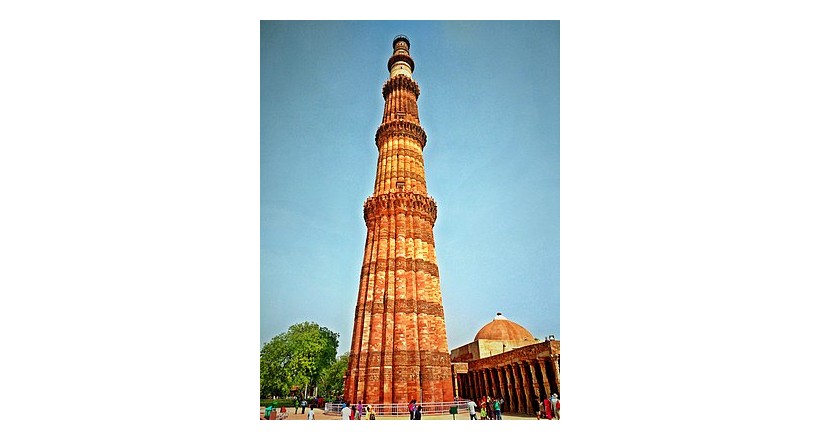 The Qutb Minar, also spelled as Qutub Minar or Qutub Minar, is a minaret that forms part of the Qutb complex, a UNESCO World Heritage Site in the Mehrauli area of Delhi, India. Qutb Minar is a 73-metre (239.5 feet) tall tapering tower of five stories, with a 14.3 metres (47 feet) base diameter, reducing to 2.7 metres (9 feet) at the top of the peak. It contains a spiral staircase of 379 steps

Qutubuddin Aibak, founder of the Delhi Sultanate, started construction of the Qutb Minar's first storey around 1199. In 1220, Aibak's successor and son-in-law Shamsuddin Iltutmish completed a further three storeys. In 1369, a lightning strike destroyed the top storey. Firoz Shah Tughlaq replaced the damaged storey, and added one more. Sher Shah Suri also added an entrance to this tower while he was ruling and Humayun was in exile.

Qutb Minar was established along with Quwwat-ul-Islam Mosque around 1192 by Qutb-ud-din Aibak, first ruler of the Delhi Sultanate. The mosque complex is one of the earliest that survives in the Indian subcontinent. The minaret is named after Qutb-ud-din Aibak, or Qutbuddin Bakhtiar Kaki, a Sufi saint. Its ground storey was built over the ruins of the Lal Kot, the citadel of Dhillika. Aibak's successor Iltutmish added three more storeys.