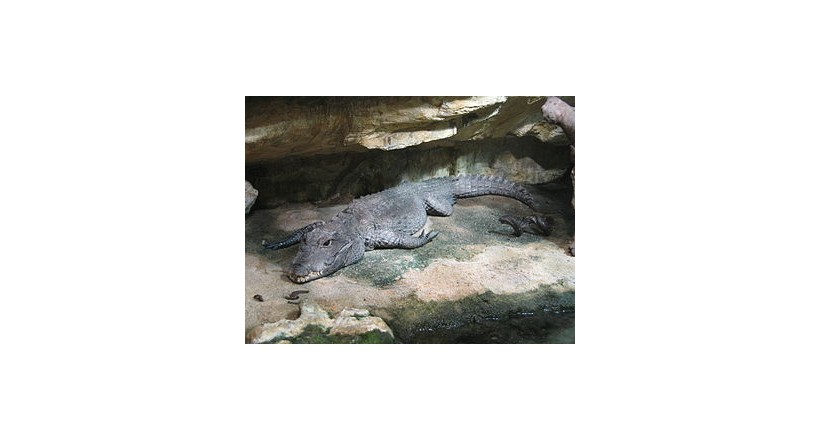 The dwarf crocodile (Osteolaemus tetraspis), also known as the African dwarf crocodile, broad-snouted crocodile (a name more often used for the Asian mugger crocodile) or bony crocodile,is an African crocodile that is also the smallest extant (living) species of crocodile. Sampling has identified three genetically distinct populations. Some feel that the findings should elevate the subspecies to full species status.

Osteolaemus tetraspis is currently the only species included in the monotypic genus Osteolaemus, with two recognized subspecies:

The second subspecies has had a somewhat convoluted taxonomical history. It was first described as Osteoblepharon osborni by Schmidt in 1919, based on a few specimens from the Upper Congo River Basin in what is now the Democratic Republic of Congo. However, Inger in a 1948 paper found the specimens wanting of characteristics that would justify a generic separation from Osteolaemus and referred the specimens to Osteolaemus osborni. In 1961, it was reduced to subspecies rank.

A study of morphology published in 2007, and studies of DNA in 2009, 2013 and 2015 indicate that three distinctly different populations of Osteolaemus may merit full species recognition. These are O. tetrapis (Central Africa, except the Congo River Basin), O. osborni (Congo River Basin), and a third possibly unnamed species (West Africa).Uncertainty exists for the population in Nigeria (between O. tetrapis and the possibly unnamed West African species) as it has not been studied. A fourth clade was found in a study of captives in 2013, but where members of this clade live in the wild is unclear. In some regions the species may come into contact. For example, Cameroon is home to both O. tetrapis and O. osborni.