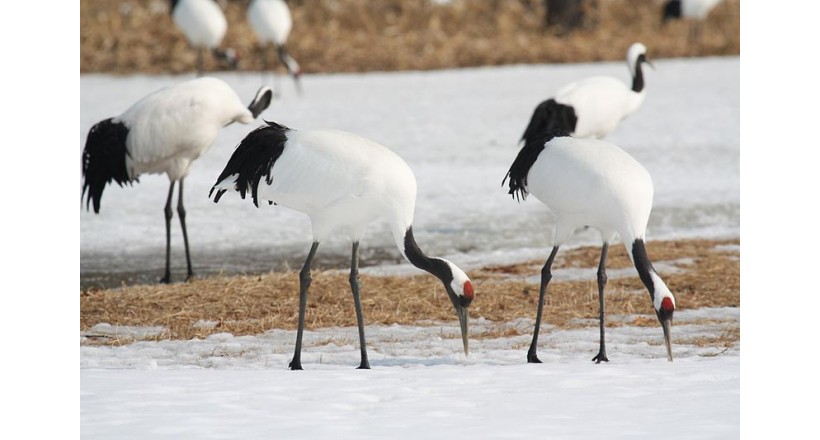 The red-crowned crane (Grus japonensis), also called the Manchurian crane or Japanese crane (traditional Chinese: 丹頂鶴; simplified Chinese: 丹顶鹤; pinyin: dāndǐng hè; Japanese: 丹頂鶴 or タンチョウヅル; rōmaji: tanchōzuru; Korean: 두루미; romaja: durumi; the Chinese character '丹' means 'red', '頂/顶' means 'crown' and '鶴/鹤' means 'crane'), is a large East Asian crane among the rarest cranes in the world. In some parts of its range, it is known as a symbol of luck, longevity, and fidelity.Adult red-crowned cranes are named for a patch of red bare skin on the crown, which becomes brighter during mating season. Overall, they are snow white in color with black on the wing secondaries, which can appear almost like a black tail when the birds are standing, but the real tail feathers are actually white. Males are black on the cheeks, throat, and neck, while females are pearly gray in these spots. The bill is olive green to greenish horn, the legs are slate to grayish black, and the iris is dark brown.