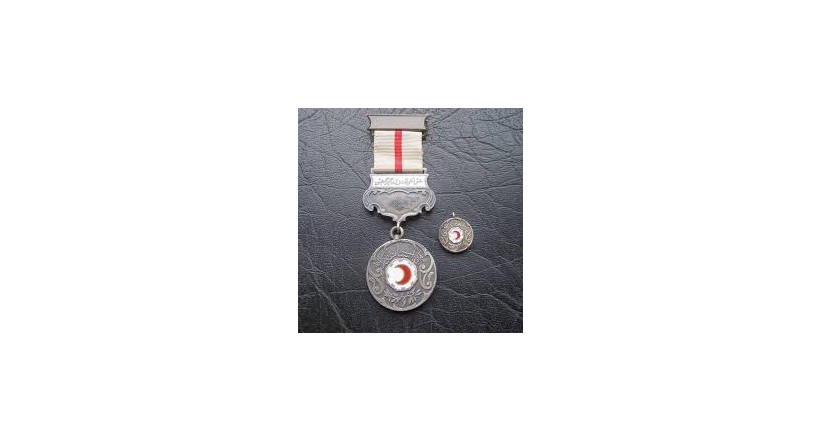 Red Crescent Medal was instituted in 1912 by the 35th Sultan of the Ottoman Empire Mehmed V Reshad who reigned from 27.04.1909 to 03.07.1918, to reward Red Crescent personnel, an association founded on June 11, 1868. Decoration was introduced in three classes, gold, silver and bronze, and was issued to Red Crescent members and volunteers regardless of their gender for merits in care of sick and wounded.

Bronze and silver medals were awarded by the Executive Committee of the Red Crescent while gold medal was bestowed by the Sultan himself.

An obverse had a central circular white enameled medallion with a red enameled crescent facing left. An inscription “Humane Assistance” was situated above, and two laurel branches were placed below. A reverse was totally plain except for a fine floral ornamental design.

A circular medal was 28,5 mm in diameter and was made of gold, silver or bronze depending on its class. It was worn suspended from a silk white ribbon with a central vertical red stripe. The uniquely shaped suspension bar bore the tughra, i.e. calligraphic monogram of the Sultan Mehmed V Reshad and a white enameled rectangular bar with an inscription “Ottoman Red Crescent Association” (“Hilâl-i Ahmer Cemiyeti”). White enameled bar at the top of the ribbon indicated years served with the Red Crescent Association. A silver clasp made of three oak leaves was attached to ribbon if medal was awarded for merits at the battlefield. Women recipients wore decoration on a traditional bow.

Red Crescent Medal was awarded until the proclamation of the Turkish Republic in October 1923.