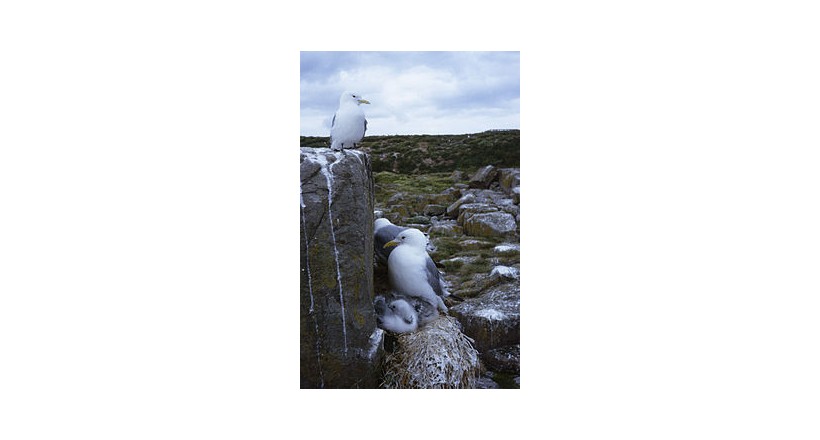 The two species are physically very similar. They have a white head and body, grey back, grey wings tipped solid black and a yellow bill. Black-legged kittiwake adults are somewhat larger (roughly 40 cm (16 in) in length with a wingspan of 90–100 cm (35–39 in)) than red-legged kittiwakes (35–40 cm (14–16 in) in length with a wingspan around 84–90 cm (33–35 in). Other differences include a shorter bill, larger eyes, a larger, rounder head and darker grey wings in the red-legged kittiwake. While most black-legged kittiwakes do, indeed, have dark-grey legs, some have pinkish-grey to reddish legs, making colouration a somewhat unreliable identifying marker.

In contrast to the dappled chicks of other gull species, kittiwake chicks are downy and white since they are under relatively little threat of predation, as the nests are on extremely steep cliffs. Unlike other gull chicks which wander around as soon as they can walk, kittiwake chicks instinctively sit still in the nest to avoid falling off. Juveniles take three years to reach maturity. When in winter plumage, both birds have a dark grey smudge behind the eye and a grey hind-neck collar. The sexes are visually indistinguishable.