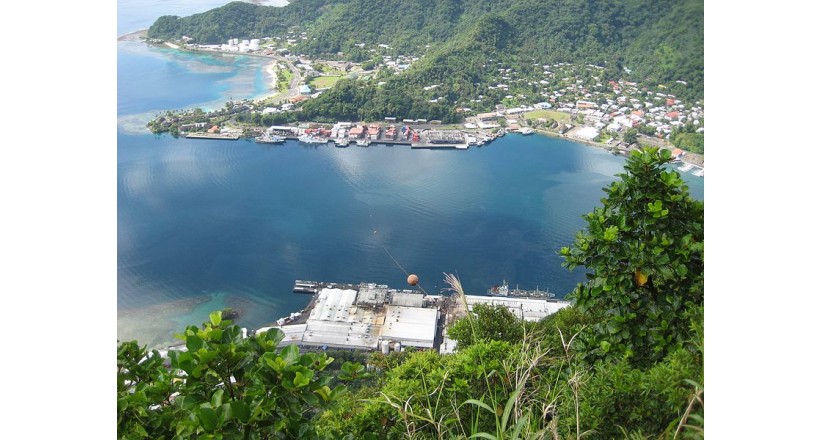 Pago Pago Harbor on Tutuila Island in American Samoa is one of the world's largest natural harbors. The capital, Pago Pago is located on the inner reaches of the harbor, close to its northwesternmost point. It has the highest annual rainfall of any harbor in the world It is also considered one of the best and deepest deepwater harbors in the South Pacific Ocean or in Oceania as a whole. Pago Pago Bay is over 400 feet (120 m) deep, two miles (3.2 km) long, and it is 50% landlocked.

Villages along the harbor include several communities in the Greater Pago Pago Area, including Utulei, Fagatogo, Malaloa, Pago Pago proper, Satala, Anua and Atu'u. The judicial capital is Fagotago, while the legislative capital is Utulei.

Pago Pago Harbor is surrounded and sheltered by mountains such as Mount Alava, Mount Matafao and Rainmaker Mountain (Mount Pioa). The entrance to Pago Pago Bay is marked by two mountains: Peiva in the east and Matafao Peak in the west. The harbor is all that remains from the volcanic crater that built Tutuila Island. At some point, one wall of the crater collapsed and the sea came rushing in creating a near complete shelter from the power of the sea at large.

The village communities which lie within the Pago Pago Bay Area are jointly known as Ma'upūtasi (“the only house of chiefs”). They are Pago Pago, Aūa, Fagatogo, Leloaloa, and Faga'alu

Fagatogo was struck by a tsunami on 29 September 2009, causing damage and rock slides. A significant amount of debris and oil were dumped into Pago Pago Harbor during the 2009 Samoa earthquake and tsunami, which devastated communities along the harbor's coastline, including Pago Pago.Debris including cars, household items, and boats were thrown into the harbor by the force of the wave.According to the 14-page American Samoan government report, Post-Tsunami Coastal Resource Damage Assessment, "The inner section of Pago Pago Harbor is severely polluted and will require an extensive cleanup program with a significant amount of manpower ... The destruction is everywhere.

An oil spill approximately 40 feet wide occurred at the mouth of Pago Pago Harbor as a result of the tsunami. Barrels containing fuel were thrown into the harbor by the tsunami and washed up on shore.

It is suggested that one must avoid eating any fish or invertebrate caught in Pago Pago Harbor because they are contaminated with heavy metals and other pollutants.