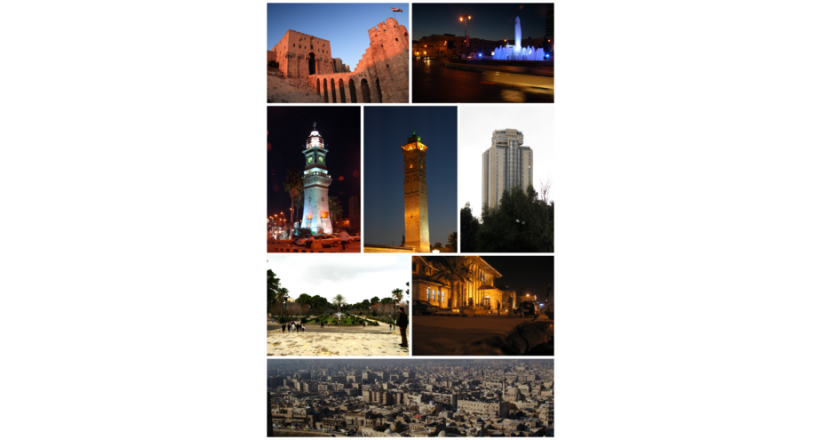 Aleppo is a city in Syria and the center of Aleppo , Syria 's largest governorate in terms of population with an official population of more than 4.6 million ( 2004 estimates). It is located northwest of Syria , 310 km (193 miles) from Damascus . It is also the largest city of the Levant,  was the capital of the Kingdom of Yemdah Amorite , and successive civilizations such as Hittite and Aramaic and Assyrian and Persian and Hellenistic and Roman and Byzantine and Islamic. In the Abbasid period, Aleppo emerged as the capital of the Hamdanid state, which stretched from Aleppo to the Euphrates and Mosul . Aleppo is one of the oldest inhabited cities in the world since the beginning of the sixth millennium BC.  Excavations at Tell al-Souda and Tal al-Ansari, south of the old city, showed that the area was occupied in at least the last part of the third millennium  . In the first mention of Aleppo in cuneiform tablets discovered in the Kingdom of Ebla and Mesopotamia, where its military and commercial superiority was observed.  Such a history is probably due to being a strategic trade point halfway between the Mediterranean and Mesopotamia and at the end of the Silk Road passing through Central Asia and Mesopotamia . For centuries Aleppo remained the largest Syrian city and the third city in the Ottoman Empire after Istanbul and Cairo .. Trade turned to sea when the Suez Canal was opened in 1869 and the importance of Aleppo began to decline slowly. Aleppo suffered the greatest blows at the beginning of the 20th century.When the Ottoman Caliphate fell after World War I, Aleppo split its northern parts (mostly within the northern Syrian provinces ), which was annexed to Turkey in 1920 by an agreement between Ataturk and the French Mandate authorities . Aleppo lost trade with the cities of these regions, especially those that historically belonged to Aleppo, such as Anab , Maraash , Adana and Mersin , and important railways connecting Mosul . The Sykes-Picot Agreement and the separation of Iraq from Syria led to a recession and a significant deterioration in Aleppo's economy. In 1940, Aleppo lost access to the sea after losing its main port on the Mediterranean in Iskenderun . Aleppo's political position has declined because Damascus is the capital of Syria. Despite all these strikes, this city remained the economic capital of Syria, it contains the most important industrial plants and is also the center of agricultural areas in Syria, especially the cultivation of cotton necessary for the textile factories flourishing in the city. Aleppo and its countryside gave most of Syria's total product until the end of the 1950s. The ancient city ​​of Aleppo became a UNESCO World Heritage Site in 1986.  The city was named the Capital of Islamic Culture for the Arab World in 2006. During the Syrian crisis , Aleppo has been severely affected economically and economically by fighting, shelling and transfer of factories to Turkey, and the city's economy has been stalled and many of its monuments such as the minaret of the Umayyad Mosque and the burning of most of the old markets of Aleppo have been destroyed.