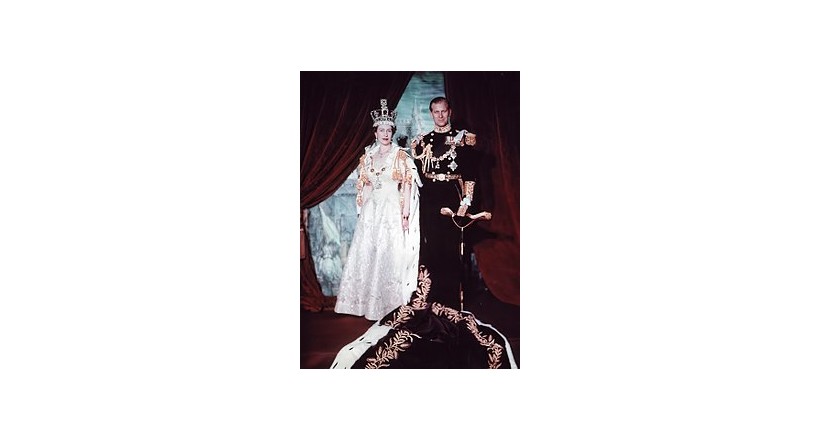 The coronation of Elizabeth II took place on 2 June 1953 at Westminster Abbey, London. Elizabeth II ascended the throne at the age of 25 upon the death of her father, George VI, on 6 February 1952, being proclaimed queen by her privy and executive councils shortly afterwards. The coronation was held more than one year later because of the tradition of allowing an appropriate length of time to pass after a monarch dies before holding such festivals. It also gave the planning committees adequate time to make preparations for the ceremony. During the service, Elizabeth took an oath, was anointed with holy oil, invested with robes and regalia, and crowned Queen of the United Kingdom, Canada, Australia, New Zealand, South Africa, Pakistan, and Ceylon (now Sri Lanka).

Celebrations took place across the Commonwealth realms and a commemorative medal was issued. It was the first British coronation to be televised; television cameras had not been allowed inside the abbey during her father's coronation in 1937. Elizabeth's was the fourth and last British coronation of the 20th century. It was estimated to have cost £1.57 million (c. £43,427,400 in 2019).The one-day ceremony took 14 months of preparation: the first meeting of the Coronation Commission was in April 1952, under the chairmanship of the Queen's husband, Philip, Duke of Edinburgh. Other committees were also formed, such as the Coronation Joint Committee and the Coronation Executive Committee, both chaired by the Duke of Norfolk who, by convention as Earl Marshal, had overall responsibility for the event. Many physical preparations and decorations along the route were the responsibility of David Eccles, Minister of Works. Eccles described his role and that of the Earl Marshal: "The Earl Marshal is the producer – I am the stage manager

The committees involved high commissioners from other Commonwealth realms, reflecting the international nature of the coronation; however, officials from other Commonwealth realms declined invitations to participate in the event because the governments of those countries considered the ceremony to be a religious rite unique to Britain. As Canadian Prime Minister Louis St. Laurent said at the time: "In my view the Coronation is the official enthronement of the Sovereign as Sovereign of the UK. We are happy to attend and witness the Coronation of the Sovereign of the UK but we are not direct participants in that function." The Coronation Commission announced in June 1952 that the coronation would take place on 2 June 1953.

Norman Hartnell was commissioned by the Queen to design the outfits for all members of the royal family, including Elizabeth's coronation gown. His design for the gown evolved through nine proposals, and the final version resulted from his own research and numerous meetings with the Queen: a white silk dress embroidered with

floral emblems of the countries of the Commonwealth at the time: the Tudor rose of England, Scottish thistle, Welsh leek, shamrock for Northern Ireland, wattle of Australia, maple leaf of Canada, the New Zealand silver fern, South Africa's protea, two lotus flowers for India and Ceylon, and Pakistan's wheat, cotton and jute

Elizabeth rehearsed for the occasion with her maids of honour. A sheet was used in place of the velvet train, and a formation of chairs stood in for the carriage. She also wore the Imperial State Crown while going about her daily business – at her desk, during tea, and while reading a newspaper – so that she could become accustomed to its feel and weight. Elizabeth took part in two full rehearsals at Westminster Abbey, on 22 and 29 May, though some sources claim that she attended one or "several" rehearsals The Duchess of Norfolk usually stood in for the Queen at rehearsals.

Elizabeth's grandmother Queen Mary had died on 24 March 1953, having stated in her will that her death should not affect the planning of the coronation, and the event went ahead as scheduled. It was estimated to cost £1.57 million (c. £38,680,000 in 2016), which included stands along the procession route to accommodate 96,000 people, lavatories, street decorations, outfits, car hire, repairs to the state coach, and alterations to the Queen's regalia