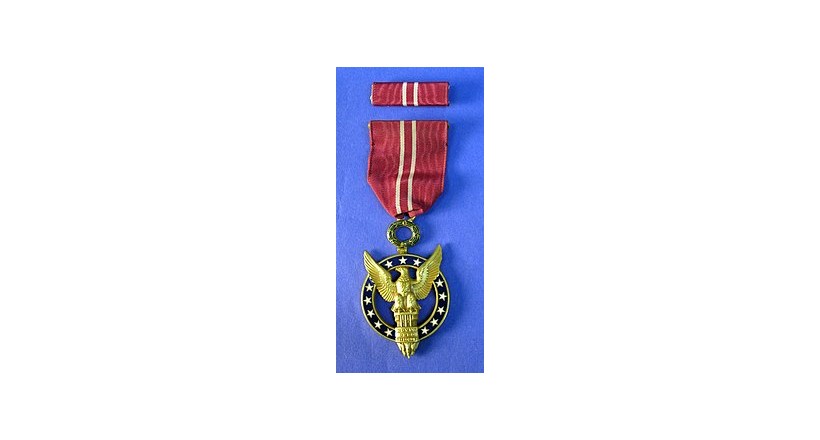 The Medal for Merit was, during the period it was awarded, the highest civilian decoration of the United States. It was awarded by the President of the United States to civilians who "distinguished themselves by exceptionally meritorious conduct in the performance of outstanding services" in the war effort "since the proclamation of an emergency by the President on September 8, 1939". Awards to civilians of foreign nations were eligible "only for the performance of exceptionally meritorious or courageous act or acts in furtherance of the war efforts of the United Nations.

The medal is made of gold-finished bronze and enamel and is worn on the left chest from a ribbon.

The Medal for Merit was created by Public Law 77-671 and its awarding codified by Executive Order 9286 - Medal for Merit on December 24, 1942, later amended and restated by Executive Order 9857A of May 27, 1947. Created during World War II, and awarded to "civilians of the nations prosecuting the war under the joint declaration of the United Nations and of other friendly foreign nations", the medal has not been awarded since 1952.

The first medals were awarded to John C. Garand and Albert Hoyt Taylor on March 28, 1944.

The Medal for Merit is currently listed as seventh in order of precedence of U.S. civilian decorations, below the Silver Lifesaving Medal and above the National Intelligence Distinguished Service Meda