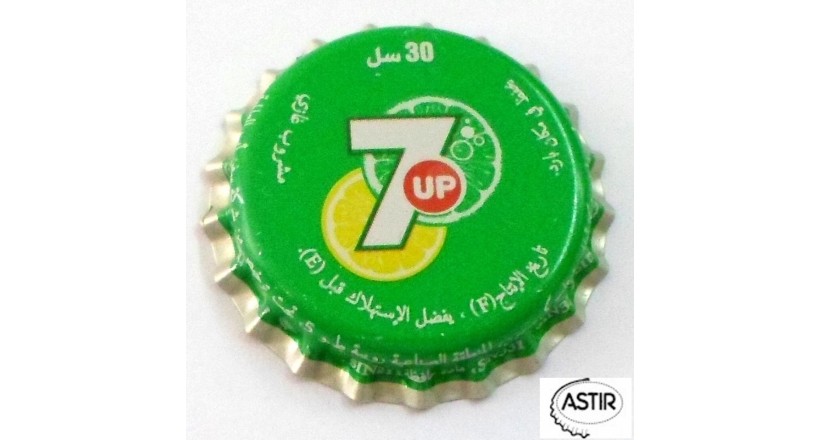 7 Up (stylized as 7up outside the U.S.) is a brand of lemon-lime-flavored non-caffeinated soft drink. The rights to the brand are held by Keurig Dr Pepper in the United States and by 7 Up international in the rest of the world. The U.S. version of the 7 Up logo includes a red circle between the "7" and "Up"; this red circle has been animated and used as a mascot for the brand as Cool Spot. Before that, the mascot was a fictional character named Fido Dido created by Joanna Ferrone and Sue Rose. He is still used for outside the U.S. for the limited time only 7 Up retro cups.

7 Up was created by Charles Leiper Grigg, who launched his St. Louis–based company The Howdy Corporation in 1920. Grigg came up with the formula for a lemon-lime soft drink in 1929. The product, originally named "Bib-Label Lithiated Lemon-Lime Soda", was launched two weeks before the Wall Street Crash of 1929. It contained lithium citrate, a mood-stabilizing drug, until 1948. It was one of a number of patent medicine products popular in the late-19th and early-20th centuries. Its name was later shortened to "7 Up Lithiated Lemon Soda" before being further shortened to just "7 Up" by 1936.

A myth exists that the 7 Up name comes from the drink having a pH over 7. That would make it neutral or basic on the scale; however, this is not the case, as the 7 Up pH is close to 3.79, making it acidic on the pH scale and similar to other drinks of this type. The real origin of the name is unclear, though Britvic claims that the name comes from the seven main ingredients in the drink, while others have claimed that the number was a coded reference to the lithium contained in the original recipe, which has an atomic mass around 7. Britvic also claims that the name is a result of the fact that 7 Up was bottled in 7-ounce bottles (Coca-Cola and most other soft drinks were bottled in 6-ounce bottles).

Westinghouse bought 7 Up in 1969. Westinghouse Electric did not purchase the company, 7 Up was a privately held corporation by the original founding families until it was sold in 1978 to Philip Morris, who then in 1986 sold it in two parts: the international division to Pepsico and the U.S. business to a group led by the investment firm Hicks & Haas. In the U.S., 7 Up merged with Dr Pepper in 1988; Cadbury Schweppes bought the combined company in 1995. The Dr Pepper Snapple Group was spun off from Cadbury Schweppes in 2008; it merged with Keurig Green Mountain in 2018 to form Keurig Dr Pepper.Commonly drunk cold with ice, 7 Up is also very well known as a mixer for highball alcoholic lemon-lime soda cocktails, the most popular version being the Seven and Seven (Seagram's 7 Crown and 7 Up). 7 Up is also used in non-alcoholic punches.