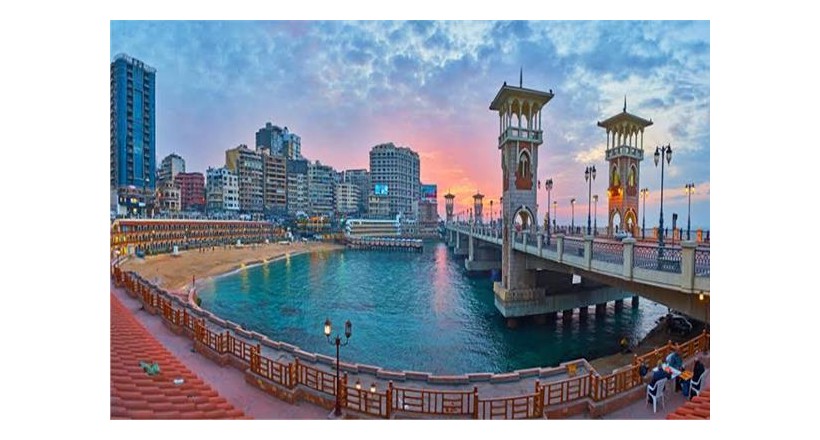 Alexandria is the second capital of Egypt and its capital was ancient , the capital of Alexandria and its largest city, located on the coast of the Mediterranean Sea about 55 km northwest of the Nile Delta , bordered to the north by the Mediterranean Sea, Lake Mariout south to km 71 on the road to Cairo Alexandria Desert , bordered to the east by Abu Qir Bay and the city of Edko , and the area of ​​Sidi Kreir west until kilometer 36.30 on the Alexandria- Matrouh highway.

Alexandria has many distinctive features, as it has the largest seaports of Egypt (the port of Alexandria and the port of Dekheila ) passing through the city about 80% of the total Egyptian imports and exports, and also includes the new library of Alexandria, which can accommodate more than 8 million books,  There are many museums and archaeological sites such as Qaitbay Citadel, Sawari Column , etc. Alexandria has a population of about 4,123,869 (according to the 2006 census) engaged in commercial, industrial and agricultural activities. Alexandria is divided into nine administrative districts: the first district of Montazah , the second district of Montazah , the district of Sharq , the central district , the West , the customs district , the Ajami district , the first district of Ameriya ,  and the second district of Ameriya

The construction of Alexandria began by Alexander the Great in 332 BC by filling a part of the water separating an island stretching off the main coast called Pharos with an ancient port, and a small village called Ractos or Raqoda surrounded by other small villages. Spread between the sea and Lake Mariout, and taken by Alexander the Great and his successors as the capital of Egypt for nearly a thousand years, until the Islamic conquest of Egypt by Amr ibn al-Aas in 641 , Alexandria was famous throughout history through many monuments such as the ancient library of Alexandria, which included more than 700,000 volumes, and the lighthouse of Alexandria , considered one of the seven wonders of the world ,  Due to its enormous height of about 120 meters, this lighthouse survived until it was destroyed by a strong earthquake in 1307 .

Historians believe that Alexander's choice of Alexandria to be the capital of his state was guided by his mentor Homer in the saga of the Odyssey, where Telemac, son of Odysseus of Ithaca, went to Menelaus of Sparta, asking him if he knew anything about his father's fate. Menelaus recounted the horrors of war, the courage of the King of Ithaca and his lost army, and that after their armies had grown tired, they reached the shores of Egypt, on the island of Pharos, and there, says the King of Sparta: "Artwena from Kawther this country under which rivers run