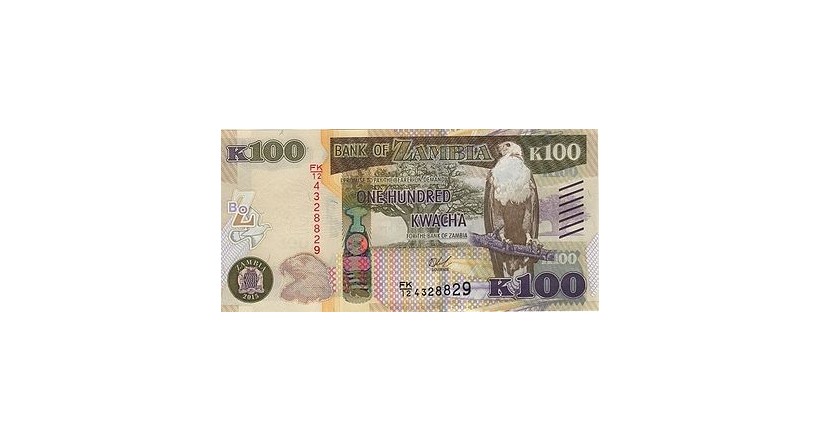 The kwacha (ISO 4217 code: ZMW) is the currency of Zambia. It is subdivided into 100 ngwee.The name kwacha derives from the Nyanja, Bemba, and Tonga language word for "dawn", alluding to the Zambian nationalist slogan of a "new dawn of freedom". The name ngwee translates as "bright" in the Nyanja language.

Prior to independence, the Rhodesia and Nyasaland pound was the legal tender of the short-lived British protectorate of Northern Rhodesia. Banknotes of 10 shillings, 1, 5, and 10 pounds issued by the Central Africa Currency Board were in circulation, together with coins of ½, 1, 3, 6 pence, and 1, 2, 2½, and 5 shillings. After independence, the Bank of Zambia issued the first Zambian currency, the Zambian pound, in 1964. The issued paper bills and coins were of similar denominations as these used before independence, except for the 10 pounds note, which was never issued by the Bank of Zambia. A new design to depict the newly independent country's history and struggle was adopted. The two currencies - the Rhodesia and Nyasaland pound and the Zambian pound, were allowed to circulate in parallel until December 15, 1965, when the South Rhodesian pound bills and coins were withdrawn from circulation, except for the 3 pence coin which was allowed to circulate alongside its Zambian alternative for a brief period.

On July 1, 1966, the parliament approved the arrangements of the decimal currency system (Act 40 of 1966). The government voted in favor of decimalisation, and changing the main currency unit to Kwacha, with one kwacha being equal to 100 ngwee. The exchange rate was set to one kwacha equivalent to ten Zambian shillings, or one half of a Zambian pound. Thus, by January 16, 1968, all Zambian pound bills and coins were removed from circulation and replaced by the new kwacha bills, and ngwee coins. The Zambian pound bills of 10 shillings, 1, and 5 pounds were changed into 1, 2 and 10 kwacha respectively, a bill of 50 ngwee was issued to replace the old 5 shillings coin, alongside a new bill of 20 kwacha. Ngwee coins with the denominations of 1, 2, 5, 10, and 20 ngwee replacing the existing 1, 3, 6 pence, 1, and 2 shillings coins respectively. The Zambian pound notes, and coins ceased to be a legal tender on January 31, 1974.

At the very beginning, the kwacha was pegged to the pound at a fixed rate of 1.7094 kwacha per 1 pound. Yet, after the devaluation of the dollar on August 15, 1971, Zambia broke all its currency's ties to the British monetary unit, and pegged the kwacha to the American monetary unit. These reforms resulted in a reduction of the kwacha's gold standard by 7.8%. A few months later, the British Chancellor of the Exchequer Anthony Barber, announced the demise of the Sterling area, and flotation of the sterling pound, causing Zambia to renounce the monetary privileges once enjoyed as a member state.

Throughout the years, the Zambian currency suffered high rates of inflation forcing the Bank of Zambia to introduce high value denominations in 2003, including 20,000 and 50,000 kwacha bills to facilitate transactions. In 2013, a new, redenominated kwacha was introduced.