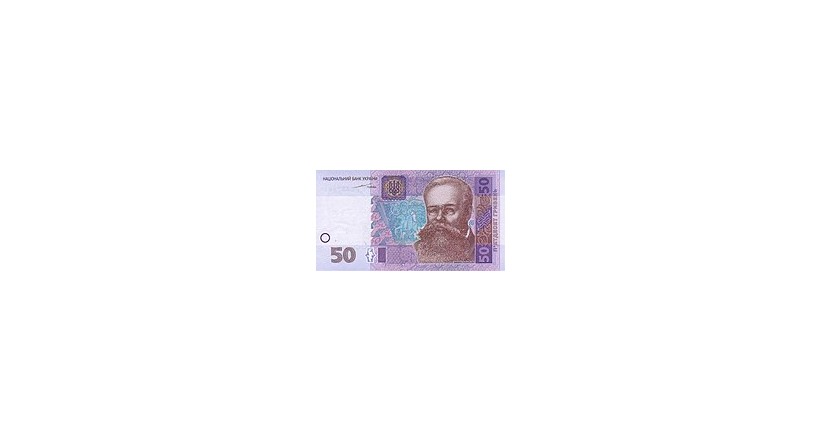 has been the national currency of Ukraine since 2 September 1996. The hryvnia is subdivided into 100 kopiyok. It is named after a measure of weight used in medieval Kievan Rus'.

The currency of Kievan Rus' in the eleventh century was called grivna. The word is thought to derive from the Slavic griva; c.f. Ukrainian, Russian, Bulgarian, and Serbo-Croatian грива / griva, meaning "mane". It might have indicated something valuable worn around the neck, usually made of silver or gold; c.f. Bulgarian and Serbian grivna (гривна, "bracelet"). Later, the word was used to describe silver or gold ingots of a certain weight; c.f. Ukrainian hryvenyk (гривеник), Russian grivennik (гривенник, "10-kopek piece").

The modern Ukrainian hryvnia is sometimes transliterated as hryvna, hrivna, gryvna or grivna, due to its Russian language counterpart, гри́вна, pronounced grívna. However, the standard English name for the currency is hryvnia.

The National Bank of Ukraine has recommended that a distinction be made between hryvnia and grívna in both historical and practical means.

A currency called hryvna was used in Kievan Rus'. In 1917, after the Ukrainian National Republic declared independence from the Russian Empire, the name of the new Ukrainian currency became hryvnia, a revised version of the Kievan Rus' hryvna. The designer was Heorhiy Narbut.

The hryvnia replaced the karbovanets during the period 2–16 September 1996, at a rate of 1 hryvnia to 100,000 karbovantsiv. The karbovanets was subject to hyperinflation in the early 1990s following the collapse of the USSR.

To a large extent, the introduction of the hryvnia was secretive. The hryvnia was introduced according to a Presidential Decree dated 26 August 1996 that was published on August 29. During the transition period, 2–16 September, both hryvnias and karbovanets were used, but merchants were required to give change only in hryvnias. All bank accounts were converted to hryvnias automatically. During the transition period, 97% of karbovanets were taken out of circulation, including 56% in the first five days of the currency reform. After 16 September 1996, the remaining karbovanets could be exchanged for hryvnias in banks.

The hryvnia was introduced during the period when Viktor Yushchenko was the chairman of National Bank of Ukraine. However, the first banknotes issued bore the signature of the previous National Bank chairman, Vadym Hetman, who resigned in 1993, because the first notes had been printed as early as 1992 by the Canadian Bank Note Company, but it was decided to delay their circulation until the hyperinflation in Ukraine was brought under control.

On 18 March 2014, following its annexation by Russia, the new Republic of Crimea announced that the hryvina was to be dropped as the region's currency in April 2014. The Russian ruble became the "official" currency in annexed Crimea on 21 March 2014. Until 1 June 2014, the hryvnia could also be used for cash payments only.

By contrast, the hryvnia remains the predominant currency in the conflicted raions of Donbass, i. e. in the secessionist areas of Donetsk and Luhansk