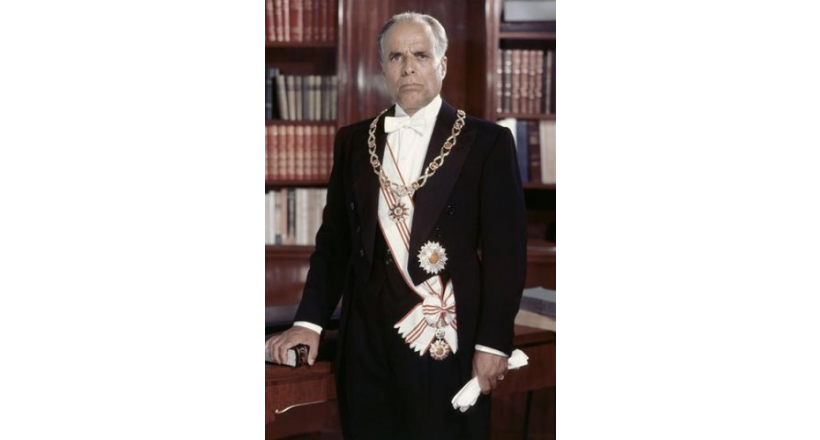 El Habib Bourguibaة‎, 3 August 1903 – 6 April 2000)was a Tunisian lawyer, nationalist leader and statesman who served as the country's leader from independence in 1956 to 1987. He first served as the second Prime Minister of the Kingdom of Tunisia before proclaiming the Republic of Tunisia in 1957 and thus becoming the first President of Tunisia. Prior to that, he played a major role in obtaining independence from France, ending the 75 year-old protectorate and earning the title of "Supreme Combatant".

Habib Ben Ali Bourguiba was born in Monastir into a modest family. He then moved to Tunis in 1907 in order to pursue his studies in Sadiki College then in Lycée Carnot, before obtaining his baccalaureate in 1924. In 1927, he graduated from the University of Paris and worked as a lawyer, after his return to Tunis, in the late 1920s. Bourguiba showed interest in fighting the protectorate since his young age. However, he only joined the national movement in the early 1930s, when he became a member of the Destour party and wrote articles denouncing the regime and its inequality. Bourguiba did not agree with the party's elders whose methods were outdated. Thus, on 2 March 1934, at 31 years old, he co-founded the Neo Destour that spearheaded the Tunisian movement for independence, during the Ksar Hellal Congress. Subsequently, he was arrested and exiled several times by the colonial administration, which unleashed its harsh repression following the riots he organized on 9 April 1938. Bourguiba was then imprisoned in the fort of Saint-Nicolas in Marseille during World War II. When he was freed, he decided to internationalize the Tunisian case and sought for the support of the Arab League. Thus, he moved to Cairo, Egypt, where he lived from 1945 to 1949. However, his attempts were in vain as the Arab countries were preoccupied with Israeli–Palestinian conflict.

When he returned to the country, Bourguiba found himself weakened by the ascending of Moncefism and the party's efforts to drive him away, as it restructured around Salah Ben Youssef. He became leader of the nationalist movement and decided to negotiate with France. However, the talks proved to be a total failure and Bourguiba, convinced that the rupture was confirmed, traveled the world seeking for support in order to introduce the case to the United Nations. Needing to draw the world's attention, he had an effective role in starting the armed struggle against France, in 1952. Maintaining turmoil, he was imprisoned in La Galite Island for two years, before being released and sent to France, ready for negotiation with the arrival of Pierre Mendès France as prime minister. Ending the unrest he started, he obtained internal autonomy agreements and returned triumphant to Tunis on 1 June 1955. However, joy was short-lived as the arrangement did not please Salah Ben Youssef and his supporters who demanded full independence of the Maghreb. This disagreement started a civil war that opposed Bourguibists, who favored a stepwise policy and modernism and youssefists, the conservative Arab nationalist supporters of Ben Youssef. The showdown ended with the Sfax Congress of 1955 in favor of Bourguiba. He then negotiated independence from France which he obtained on 20 March 1956.

Following the country's independence, Bourguiba was appointed prime minister by king Muhammad VIII al-Amin and acted as De facto ruler before proclaiming the Republic, on 25 July 1957. Subsequently, he was designated Interim President of Tunisia until the enactment of a constitution and the election of a permanent president. His main priorities upon taking over power included the improvement of the country's educational system, fighting gender inequality, developing the economy and maintaining a neutral foreign policy, which made him an exception among Arab leaders. His major reform was the Code of Personal Status which settled a modern society. Bourguiba established a presidential system which soon turned to be a twenty-year one-party state dominated by his party, the Socialist Destourian Party. A cult of personality also developed around him, before he proclaimed himself president for life in 1975, during his fourth 5 year-term. The end of his 30 year-rule was marked by his declining health, a war of succession, and the rise of clientelism and Islamism, which was concluded by his removal from power by his prime minister, Zine El Abidine Ben Ali, on 7 November 1987. He was later kept under house arrest in a residence in Monastir, where he remained until his death on 6 April 2000, and was buried in a mausoleum he had previously built there.