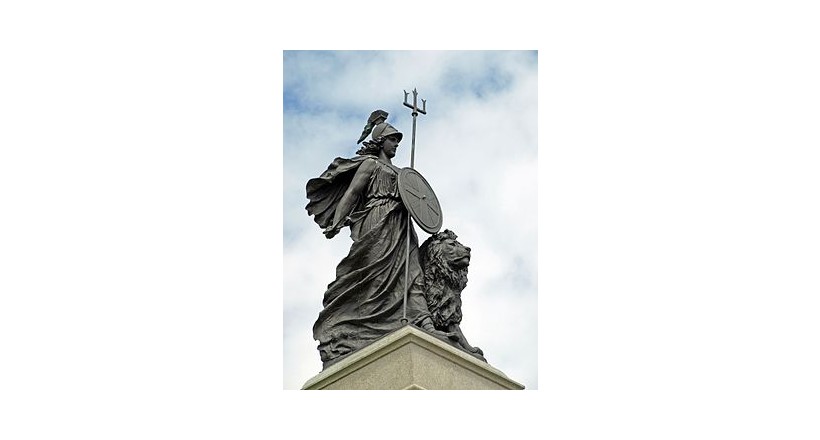 Britannia has been used in several different senses, but is best known as a national personification of the United Kingdom. The name is a Latinisation of the native Brittonic word for the island, Pretanī, which also produced the Greek form Prettanike or Brettaniai, which originally, in the fourth to the first centuries BC, designated a collection of islands with individual names, including Albion or Britain. In Modern Welsh the name remains Prydain. By the 1st century BC, Britannia came to be used for Great Britain specifically. After the Roman conquest in 43 AD, Britannia meant Roman Britain, a province covering the island south of Caledonia (roughly Scotland). When Roman Britain was divided into four provinces in 197 AD, two were called Britannia Superior and Britannia Inferior. Britannia is the name given to the female personification of the island, and it is a term still used to refer to the whole island.

In the 2nd century, Roman Britannia came to be personified as a goddess, armed with a trident and shield and wearing a Corinthian helmet. The name Britannia long survived the end of Roman rule in Britain in the 5th century and yielded the name for the island in most European and various other languages, including the English Britain and the modern Welsh Prydain. In the 9th century the associated terms Bretwalda and Brytenwealda were applied to some Anglo-Saxon kings to assert a wider hegemony in Britain and hyperbolic inscriptions on coins and titles in charters often included the equivalent title rex Britanniae. However when England was unified the title used was rex Angulsaxonum, ('king of the Anglo-Saxons'.). After centuries of declining use, the Latin form was revived during the English Renaissance as a rhetorical evocation of a British national identity. Especially following the Acts of Union in 1707, which joined the Kingdoms of England and Scotland, the personification of the martial Britannia was used as an emblem of British maritime power and unity, most notably in "Rule, Britannia!".

A British cultural icon, she was featured on all modern British coinage series until the redesign in 2008, and still appears annually on the gold and silver "Britannia" bullion coin series. In 2015 a new definitive £2 coin was issued, with a new image of Britannia. She is also depicted in the Brit Awards statuette, the British Phonographic Industry's annual music awards.