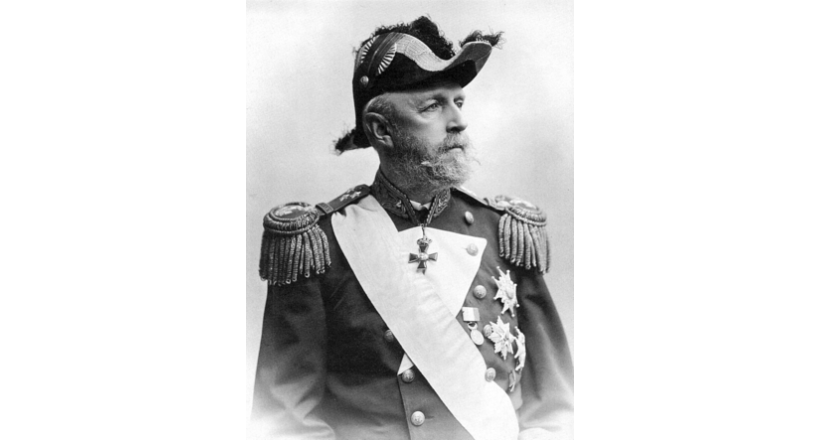 Oscar II was King during a time when both Sweden and Norway were undergoing a period of industrialization and rapid technological progress. His reign also saw the gradual decline of the Union of Sweden and Norway, which culminated in its dissolution in 1905. He was subsequently succeeded as King of Norway by his grandnephew Prince Carl of Denmark under the regnal name Haakon VII, and as King of Sweden by his eldest son, Gustaf V.

Oscar II is the paternal great-great-grandfather of Carl XVI Gustaf, King of Sweden since 1973. Harald V, King of Norway since 1991, is a great-grandson of Oscar II, through his third son Prince Carl, Duke of Västergötland.

Oscar Fredrik was born in Stockholm on 21 January 1829, the third of four sons of Crown Prince Oscar and Josephine of Leuchtenberg. Upon his birth, he was created Duke of Östergötland. During his childhood he was placed in the care of the royal governess, Countess Christina Ulrika Taube.

Prince Oscar entered the Royal Swedish Navy as a midshipman at the age of eleven, and was appointed junior lieutenant in July 1845. Later he studied at Uppsala University, where he distinguished himself in mathematics. On 13 December 1848, was made an honorary member of the Royal Swedish Academy of Sciences.

A distinguished writer and musical amateur himself, King Oscar proved a generous friend of learning, and did much to encourage the development of education throughout his dominions. In 1858 a collection of his lyrical and narrative poems, Memorials of the Swedish Fleet, published anonymously, obtained the second prize of the Swedish Academy. His "Contributions to the Military History of Sweden in the Years 1711, 1712, 1713", originally appeared in the Annals of the Academy, and were printed separately in 1865. His works, which included his speeches, translations of Herder's Cid and Goethe's Torquato Tasso, and a play, Castle Cronberg, were collected in two volumes in 1875–76, and a larger edition, in three volumes, appeared in 1885–88.

In 1859, Prince Oscar became heir-presumptive to the thrones of Sweden and Norway, as his eldest brother King Charles XV of Sweden/Charles IV of Norway was without a legitimate heir, having lost his only son, Prince Carl Oscar, Duke of Södermanland, to pneumonia in 1854. His second elder brother, Prince Gustaf, Duke of Uppland, had before died of typhoid fever in 1852.

King of Sweden and Norway

Oscar II became King on 18 September 1872, upon the death of his brother, Charles XV. At his accession, he adopted as his motto Brödrafolkens väl / Broderfolkenes Vel ("The Welfare of the Brother Peoples"). While the King, his family and the Royal Court resided mostly in Sweden, Oscar II made the effort of learning to be fluent in Norwegian and from the very beginning realized the essential difficulties in the maintenance of the union between the two countries.