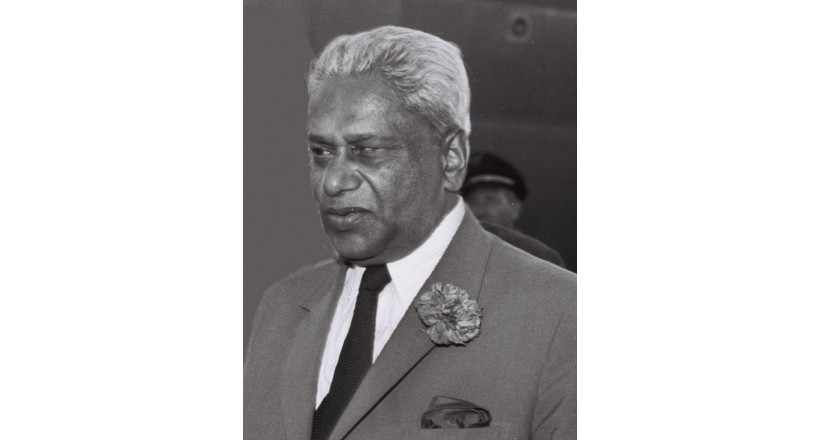 The Rt Hon.   September 18, 1900 – December 15, 1985; often referred to as Chacha Ramgoolam) was a Mauritian politician, statesman and philanthropist. He was a leader in the Mauritian independence movement, and served as the first Chief Minister and Prime Minister of Mauritius, as well as its Governor-General. He was the Chairperson of the Organisation of African Unity from 1976 to 1977. As the leader of the Labour Party, Ramgoolam fought for the rights of labourers and led Mauritius to independence in 1968.

After his tertiary studies in London, Ramgoolam, who was initially a fervent defendant of the British administration and its empire, started calling for mass movement in order to obtain equal treatment, consideration, education and chances for all Mauritians through his authorship in a newspaper. His views changed due to then-fate of the Indo-Mauritian community which was oppressed, uneducated and ill-treated by the elite. He later joined the Labour Party to align himself with other members who were asking for equal rights and adequate working conditions for workers (mainly laborers). He later took leadership of the fight fought by other party members including Dr. Maurice Cure, Emmanuel Anquetil, Dr. R. Seeneevasen and Dr. Hassenjee.

He later cooperated with the Independent Forward Block (IFB) led by the Bissoundoyal brothers (Pundit Basdeo and Sookdeo; who were demanding for a complete decolonization and the removal of British administration from all Mauritian territories) and the Committee D'action Musulmane (CAM) led by Abdool Razack Mohamed (who demanded constitutional guarantees for the Muslim and other minority communities in an effort to prevent a circumstantial Hindu hegemony, which never happened) to form the independence party and movement which eventually led to Independence after the 1967 Mauritian general election.

Few years later, he formed a national government with then opposition party Parti Mauricien Social Démocrate (PMSD; the nationalist, conservative and only party to lead a campaign against Independence) led by Gaetan Duval in order to prevent the Mauritian economy and social environment to collapse.

Ramgoolam has been praised and highly revered for his work for independence, free education & free heatlhcare. He is criticized for accepting the unlawful excision of the Chagos Archipelago from Mauritian territories by the British government. However official colonial documents which has been declassified in the UK revealed that Ramgoolam acted under duress. The British eventually evicted all the natives of the archipelago to mainland Mauritius and Seychelles to allow American to build a military base on the biggest island of the Archipelago, Diego Garcia. He is also criticized for the poor performance of his last government (1976–1982) which lacked extreme economic growth and led to the country being on the verge of bankruptcy.

Due to the extreme poor performance of his government, his party lost the 1982 general elections with a heavy defeat when none of his candidates were elected to parliament. He himself lost his seat leading to the downfall of the Labour Party. He then supported the newly formed party named MSM and its leader Anerood Jugnauth in the 1983 elections. The Labour Party became a minority party in a coalition government and Ramgoolam was appointed as Governor-General, position he held until his death.

As Mauritius' first Prime Minister, he played a crucial role in shaping modern Mauritius' government, political culture and foreign policy. He worked for the emancipation of the Mauritian population, established free universal education and free health care services, and introduced old age pensions. He is known as the "Father of the Nation". His son, Navin Ramgoolam, has had three terms as Prime Minister of Mauritius.