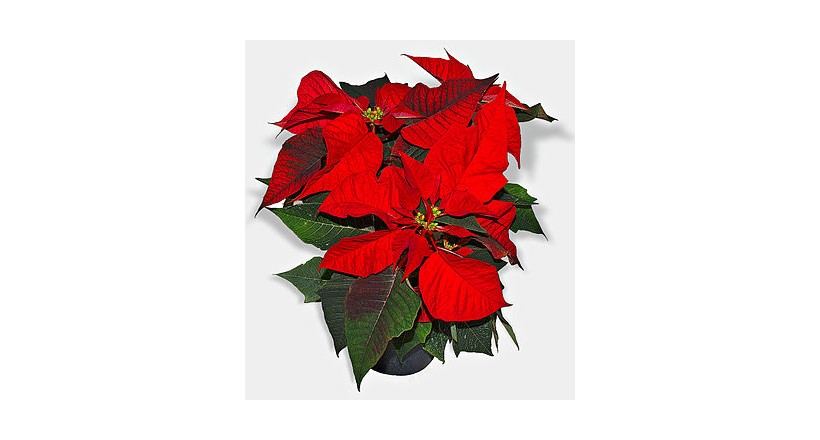 The poinsettia (also known as Christmas Flower) is a commercially important plant species of the diverse spurge family (Euphorbiaceae). The species is indigenous to Mexico. It is particularly well known for its red and green foliage and is widely used in Christmas floral displays. It derives its common English name from Joel Roberts Poinsett, the first United States Minister to Mexico, who introduced the plant to the US in 1825.

The poinsettia was described as a new species in 1834 by German scientist Johann Friedrich Klotzsch. Klotzsch credited Carl Ludwig Willdenow with the species name "pulcherrima", and the authority is given as Willd. ex Klotzsch. The holotype had been collected in Mexico during an 1803–1804 expedition by Alexander von Humboldt and Aimé Bonpland.

The common name "poinsettia" is derived from Joel Roberts Poinsett, a botanist and the first US Minister to Mexico. Possibly as early as 1826, Poinsett began sending poinsettias from Mexico back to his greenhouses in South Carolina.

Euphorbia pulcherrima is a shrub or small tree, typically reaching a height of 0.6–4 metres (2–13 ft). The plant bears dark green dentate leaves that measure 7–16 centimetres (2.8–6.3 in) in length. The colored bracts—which are most often flaming red but can be orange, pale green, cream, pink, white, or marbled—are often mistaken for flower petals because of their groupings and colors, but are actually leaves. The colors of the bracts are created through photoperiodism, meaning that they require darkness (12 hours at a time for at least five days in a row) to change color. At the same time, the plants require abundant light during the day for the brightest color.

The flowers of the poinsettia are unassuming and do not attract pollinators. They are grouped within small yellow structures found in the center of each leaf bunch, and are called cyathia.