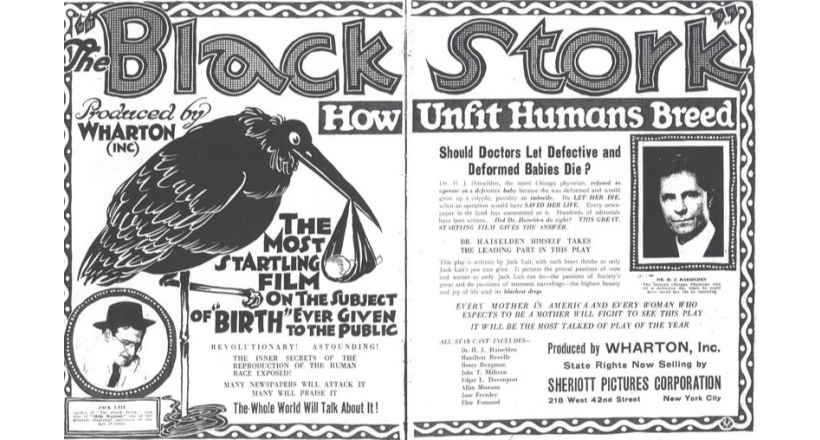 The Black Stork is a 1917 motion picture written by and starring Harry J. Haiselden, the chief surgeon at the German-American Hospital in Chicago. The Black Stork is Haiselden's fictionalized account of his eugenic infanticide of the child John Bollinger. The film was re-released in 1927 under the title Are You Fit to Marry? Bollinger case On November 17, 1915, Harry J. Haiselden, despite public protest, allowed the syphilitic child John Bollinger to die. Haiselden convinced the child's parents that John would have grown up to be a miserable outcast and that death was this child's best option as well as in the best interests of society As the child was dying, an unknown kidnapper attempted to save John and the Catholic community protested the action; however activist Helen Keller and attorney Clarence Darrow each wrote separate articles in support of Dr. Haiselden's choice. Dr. Haiselden was an outspoken supporter of the eugenics movement prior to the case and, after the publicity made him famous, he took eugenics onto the national stage. Haiselden was ultimately acquitted by a jury for allowing John Bollinger to die. The Illinois Board of Health attempted to revoke Haiselden's medical license but that action was dropped. A coroner's jury determined that the child was not syphilitic, but brain damaged and therefore defective. The Chicago Medical Society expelled Haiselden from their membership for The Black Stork and the publicity that he sought out after the infanticide Haiselden's eugenics Dr. Haiselden practiced "lethal eugenics", which is the third stage in the field of eugenic thought. Both passive (stage 1 eugenics) and active (stage 2 eugenics) had gained some widespread but quiet support during Haiselden's life, but Haiselden was an early supporter of lethal eugenics. Active eugenics become approved nationally in the 1927 Buck v. Bell Supreme Court ruling sanctioned eugenic sterilization in any case "for the protection and health of the state.