Wedding of Princess Elizabeth and Philip 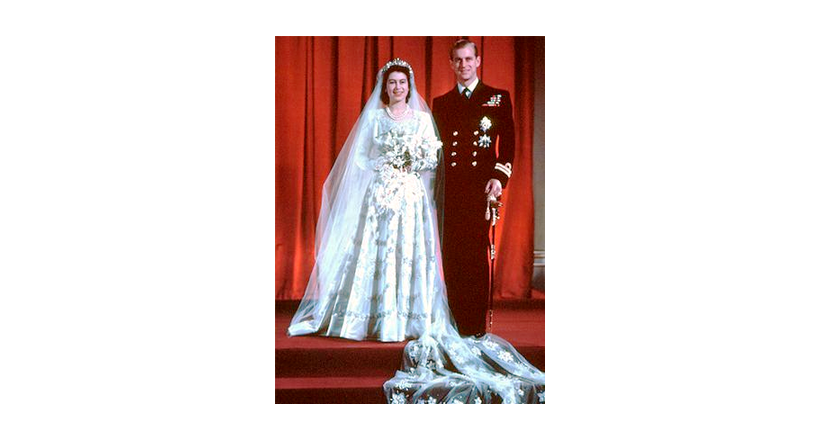 The wedding of Princess Elizabeth and Philip Mountbatten took place on 20 November 1947 at Westminster Abbey in London. Philip had been made Duke of Edinburgh on the morning of the wedding.

Elizabeth and Philip are second cousins once removed (by descent from Christian IX of Denmark and Louise of Hesse-Kassel) and third cousins (by descent from Queen Victoria and Prince Albert). Princess Elizabeth met Prince Philip of Greece and Denmark in 1934, at the wedding of Philip's cousin Princess Marina of Greece and Denmark to Prince George, Duke of Kent, paternal uncle of Elizabeth, and again in 1937 After another meeting at the Royal Naval College in Dartmouth in July 1939, Elizabeth—though only 13 years old—fell in love with Philip and they began to exchange letters. An entry in Chips Channon's diary made reference to the future marriage of Elizabeth and Philip as early as 1941, "He is to be our Prince Consort, and that is why he is serving in our Navy." The couple became secretly engaged in 1946, when Philip asked King George VI for his daughter's hand in marriage. The King granted his request providing any formal engagement was delayed until Elizabeth's 21st birthday the following April. Their engagement was officially announced on 9 July 1947. Philip proposed to Elizabeth with a 3-carat round diamond ring consisting of "a center stone flanked by 10 smaller pave diamonds."The diamonds were taken from a tiara that belonged to Philip's mother, Princess Alice of Battenberg, and were also used to create a quatrefoil bracelet for Elizabeth.

The King gave his formal consent to the marriage in his British Privy Council, in accordance with the Royal Marriages Act 1772. The same was done in Canada at a meeting of the King's Canadian Privy Council, with the Chief Justice of Canada, Thibaudeau Rinfret, standing in as deputy to the King's representative, the Governor General of Canada