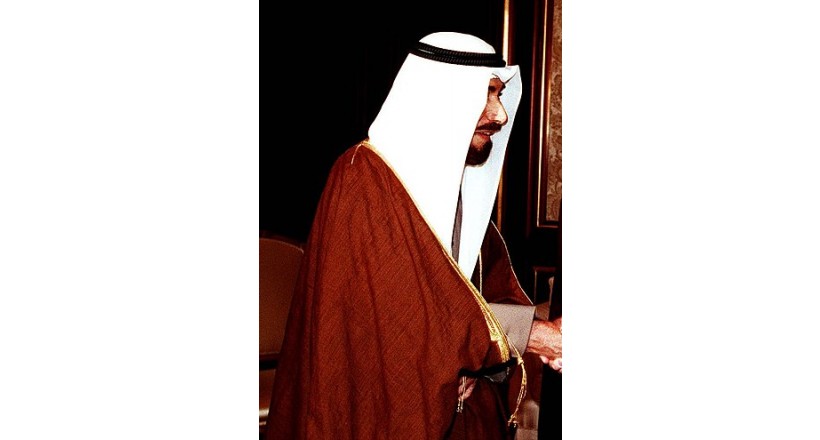 Sheikh Jaber Al-Ahmad Al-Jaber Al-Sabah ( 29 May 1926 - 15 January 2006 ), 13th and third Emir of Kuwait after independence from the United Kingdom . He is the third son of Sheikh Ahmad Al-Jaber Al-Sabah of Sheikha Bibi Al-Salem Al-Sabah, daughter of the ninth ruler of Kuwait, Sheikh Salem Al-Mubarak Al-Sabah . He was educated at the Mubarakiya School and the Ahmadiyya School . In 1949, his father appointed him as his deputy in Ahmadi.He was in charge of the city.In 1959, Sheikh Abdullah Al-Salem Al-Sabah appointed him head of the Department of Finance and Public Property.He was also chairman of the Kuwait Monetary Council.On April 1, 1961, he issued the first currency in Kuwait with his signature. . After the independence of Kuwait on June 19, 1961 and the elections of the Constituent Assembly he was appointed Minister of Finance and Industry in the first government, which was headed by Sheikh Abdullah Al-Salem Al-Sabah . When Sheikh Sabah Al-Salem Al-Sabah became Prime Minister, he became Deputy Prime Minister, and after the death of Sheikh Abdullah Al-Salem and Sheikh Sabah Al- Salem took office, he was appointed on 30 November 1965 as Prime Minister.On 31 May 1966, he pledged allegiance to the National Assembly as Crown Prince . His prince. On June 5, 1967, he became a customary ruler of Kuwait after the application of martial law, until martial law was lifted on 1 January 1968 . He assumed power on 31 December 1977 after the death of Sheikh Sabah Al-Salem Al-Sabah and was the author of the establishment of the Gulf Cooperation Council (GCC) , established in 1981 .  was assassinated on 25 May 1985 and survived on August 2, 1990. Iraq invaded Kuwait and used all means to liberate it. This was achieved on 26 February 1991 after the Second Gulf War .