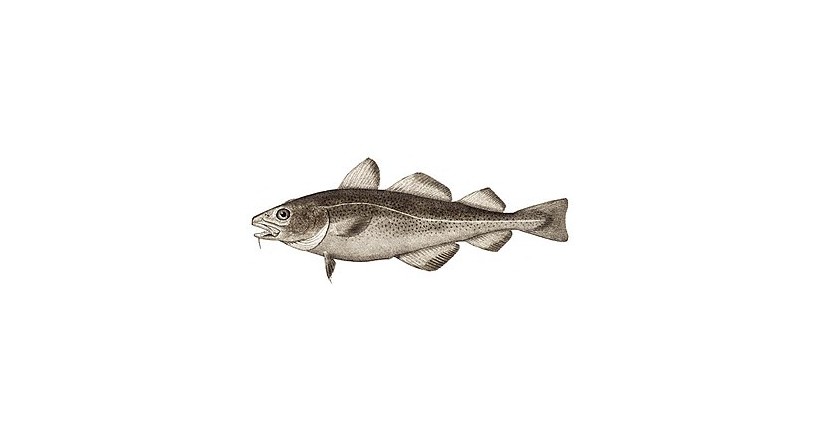 The Atlantic cod (Gadus morhua) is a benthopelagic fish of the family Gadidae, widely consumed by humans. It is also commercially known as cod or codling.Dry cod may be prepared as unsalted stockfish, as cured salt cod or clipfish.

In the western Atlantic Ocean, cod has a distribution north of Cape Hatteras, North Carolina, and around both coasts of Greenland and the Labrador Sea; in the eastern Atlantic, it is found from the Bay of Biscay north to the Arctic Ocean, including the Baltic Sea, the North Sea, Sea of the Hebrides, areas around Iceland and the Barents Sea.

Atlantic cod can live for 25 years, and usually attain sexual maturity between ages two and four, although cod in the northeast Arctic can take as long as eight years to mature fully. Colouring is brown or green, with spots on the dorsal side, shading to silver ventrally. A stripe along its lateral line (used to detect vibrations)is clearly visible. Its habitat ranges from the shoreline down to the continental shelf.

Several cod stocks collapsed in the 1990s (declined by >95% of maximum historical biomass) and have failed to fully recover even with the cessation of fishing. This absence of the apex predator has led to a trophic cascade in many areas. Many other cod stocks remain at risk. The Atlantic cod is labelled vulnerable on the IUCN Red List of Threatened Species.Adult cod form spawning aggregations from late winter to spring. Females release their eggs in batches, and males compete to fertilize them. Fertilized eggs drift with ocean currents and develop into larvae ("fry"). Age of maturation varies between cod stocks, from ages two to four in the west Atlantic, but as late as eight years in the northeast Arctic. Cod can live for 13 years or more.